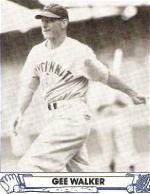 " . . . the two Walkers, Gee and Dixie . . . actually were similar players - both line-drive .300 hitters who ran well. . . Gee Walker had been immensely popular in Detroit . . ." - Bill James in the The New Bill James Historical Baseball Abstract, writing about the trade involving Gee Walker and Dixie Walker

Outfielder Gerald "Gee" Walker played 15 seasons in the big leagues, several times finishing in the top ten in the league in batting average and often finishing among the leaders in stolen bases.

Gee was in the minors from 1928 to 1930, mostly hitting around .370. With the 1930 Evansville Hubs, he and his brother Hub Walker hit far higher than anyone else on the team. Gee split the 1931 season between the Detroit Tigers, making his major league debut in April and hitting .296 in 59 games, and the Toronto Maple Leafs, for whom he hit .313 in 43 games. His brother Hub also made his major league debut with the 1931 Tigers.

In 1936 Gee's 55 doubles put him second in the league behind teammate Charlie Gehringer's 60. Walker's 55 are still in the top 20 single-season performances of all time, as of 2009.

After the 1937 season Gee was involved in a trade that involved stars and future stars such as Fred "Dixie" Walker, Vern Kennedy, Marv Owen and Mike Tresh. He was with the Chicago White Sox in 1938 and 1939, driving in 111 runs in 1939, good for fifth in the league in RBI. The year 1940 was spent with the Washington Senators, for whom he drove in 96 runs, by far the tops on the team.

The next year, 1941, he was with the Cleveland Indians before finishing out his major league career with the Cincinnati Reds from 1942 to 1945. Even in his last season, at age 37, he appeared in over 100 games.

Baseball Digest from August 1976 states that Walker had arthritis during his later years in baseball and after his playing days he worked in real estate in Florida and Mississippi.