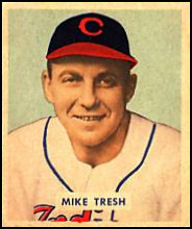 Father of Tom Tresh, Mike Tresh played twelve years in the American League, almost all with the Chicago White Sox. Mike had only two major league homers in over 1,000 games, unlike his son Tom who was a pretty good home run hitter.

Mike was a good enough catcher that he never played any other position in the majors.

After his playing days he scouted for the New York Yankees and worked for Ford Motor Company.