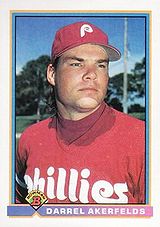 Pitcher Darrel Akerfelds played five years in the majors. After his playing days, he was a longtime bullpen coach for the San Diego Padres.

Selected by the Atlanta Braves in the ninth round of the 1980 amateur draft, Akerfelds opted instead to attend the University of Arkansas, where he initially set his sights on a career in pro football. He later transferred to Mesa State College and was a member of the bronze medal-winning Team USA at the 1982 Amateur World Series. He was taken by the Seattle Mariners in the first round of the 1983 amateur draft with the seventh overall pick; his brother, Duane Akerfelds, was taken by the club in the 22nd round but did not sign (and never played professionally). Darrel made his pro debut that summer with the Bellingham Mariners, going 5-3 with a 4.48 ERA in 12 outings.

Following the [season, Akerfelds was dealt to the Oakland Athletics along with Bill Caudill for Dave Beard and Bob Kearney. After spending most of the 1986 campaign with the Tacoma Tigers, he made his big league debut with the A's in August, making a pair of relief appearances, facing the Minnesota Twins in both games. He began the next year back with Tacoma and was traded again on July 15th, going to the Cleveland Indians (along with Brian Dorsett for Tony Bernazard). Joining the Indians' rotation shortly after the deal, he made his first major league start on July 22nd, taking a loss against the Kansas City Royals. He got his first win on August 12th, despite giving up 5 earned runs to the Baltimore Orioles in 5 innings. Fifteen days later, on August 27th, he threw his first (and only) big league complete game, taking a loss against the Milwaukee Brewers. In 16 games with the Tribe, he was 2-6 with a 6.75 ERA.

Akerfelds pitched for the Colorado Springs Sky Sox in 1988 and was selected by the Texas Rangers in the 1988 Rule V Draft following the season. He made 6 relief appearances for the Rangers in 1989 but spent most of the summer with the AAA Oklahoma City 89ers. His contract was sold to the Philadelphia Phillies the following spring, and he was a key contributor in the team's bullpen in 1990. In 71 outings, he went 5-2 with 3 saves and a 3.71 ERA, and allowed only 65 hits in 93 innings. However, he walked 54 batters while striking out only 42, and that was a harbinger of problems to come. In 1991, his ERA shot up to 5.26 in 30 games, even though he had a slightly positive K/BB ratio, and he pitched his last major league game at age 29 on July 2nd.

Over the next two years, Akerfelds pitched in the Rangers, Pittsburgh Pirates, and Toronto Blue Jays organizations. He was with the Wei Chuan Dragons of the Chinese Professional Baseball League in Taiwan in 1994, going 8-10 with two saves and a 3.51 ERA and 173 strikeouts in 163 1/3 innings. He finished second in the league in strikeouts, 27 behind leader Will Flynt. He closed his pro career in the California Angels chain after attempting to catch on as a replacement player in 1995.

Following his playing days, Akerfelds joined the San Diego Padres organization as pitching coach of the Clinton Lumberkings in 1997. After two years in the same role with the Rancho Cucamonga Quakes, he was a member of the Las Vegas Stars staff in 2000. He began 2001 as pitching coach of the Portland Beavers and in June was promoted to the Padres big league staff as bullpen coach when Greg Booker was moved to pitching coach.

In late 2010, Akerfelds was diagnosed with cancer of the pancreas. He underwent many rounds of chemotherapy in Phoenix but kept his job, missing only 14 days of the 2011 season, describing baseball as "the best therapy I know." He had an operation following the season, but it proved impossible to surgically remove the tumor. However, it had stopped growing, giving him hope and allowing him to return to the Padres to begin 2012. His final game in uniform came on April 15th, and he lost his battle with the disease on June 24th. His uniform was carried by the relief pitchers from the bullpen into the dugout prior to that afternoon's game, which the Padres won 2-0 over their interleague rivals, the Seattle Mariners. Akerfelds was 50 years old.

"Ak was an invaluable member of the Padres coaching staff. He was a loyal Padre to the end. Players and coaches were made better by Ak. He will be sorely missed." - Bud Black