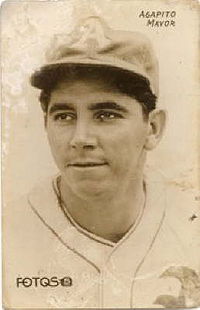 Agapito Mayor was born the same day as fellow left-handed pitcher Max Lanier, his teammate for several years. Mayor was a top pitcher of his era, going 185-141 in the minor leagues but never making it to the majors. Mayor made history in a couple international competitions as well. He was the Cuban equivalent of Don Mossi in that both were noted for their lack of handsome features. Mayor was nicknamed "Triple Feo" (Thrice Ugly) for his appearance.

Mayor starred in the Cuban National Amateur Baseball League. In 1937, his 1.13 ERA for Hershey led that high-profiled amateur circuit. He pitched that year against the New York Giants when they visited Cuba, but lost a 7-2 decision. The young left-hander was the star of the 1938 Central American and Caribbean Games, picking up four of Cuba's five wins in their Gold medal tournament. Through 2005, he was the only pitcher in the history of the Central American and Caribbean Games to have won four games in a year.

Mayor debuted in the Cuban Winter League with the 1938-1939 Almendares club, going 5-4 for the only winning record on a team which included Silvio Garcia, Rene Monteagudo and Theolic Smith. He came to the US with the 1939 Hartford Bees but had a 9.00 ERA in limited action. Back in Cuba, he was 3-2 for the 1939-1940 Almendares. In 1940, he beat the Cincinnati Reds and Johnny Vander Meer when they visited the island, then topped the St. Louis Cardinals and Mort Cooper 4-2 with a 4-hitter.

The left-hander had his best Mexican League season in 1946, the year that the Pasquel brothers got some Major Leaguers to come down for a higher salary. It would be the first of several years that Mayor and Lanier would be in the same league. Mayor was 20-9 with a 2.52 ERA and 6 shutouts. He was 4th in ERA, back of Lanier, but led the Liga in complete games (23) and shutouts. He tied Sal Maglie for the win lead and his 157 strikeouts were second only to Negro Leaguer Booker McDaniels. What made this even more impressive was that the rest of Nuevo Laredo's hurlers were 28-41.

Though the competition in Mexico was now fading, so was Mayor, as he was only 7-12 with a 4.38 ERA in the 1948 Mexican League. Returning to the US, he was 4-1 with a 3.11 ERA for the Sherman-Denison Twins. Back in Cuba in 1948-1949, he was 4-2 with a 1.86 ERA for Almendares. He then put on a show in the 1949 Caribbean Series. Mayor went 3-0 for Almendares, equaling the win total of any other team and helping them win the first Caribbean Series title. He was honored as the Caribbean Series Most Valuable Player, an award which has almost always gone to a major leaguer in the six decades since.

Mayor spent 1949 with Sherman-Denison, winning 19 while losing 10 and posting a 3.01 ERA. He was third in ERA, with teammate John Whitehead taking the lead, and he was one back of a 3-way tie for the Big State League lead in victories.

Moving to the Texarkana Bears in 1952, the 36-year-old had a 10-13, 3.80 record. He finished in the top 10 in the Big State League in ERA and walked only 47 in 186 innings as one of the league's top control pitchers. Mayor pitched out of the bullpen for Almendares in 1952-1953, going 1-0 with a 3.70 ERA in 20 outings. He continued his success against MLB teams, topping the Pittsburgh Pirates when they made their stopover in Cuba.

Mayor's biggest impact clearly was in high-profile situations - his record-setting performance in the 1938 Central American and Caribbean Games, his MVP turn in the 1949 Caribbean Series and his dominance of the 1946 Mexican League when matched against major league and Negro League stars.

In 1970, he was voted into the Cuban Baseball Hall of Fame.

Mayor spent the last three decades of his life in the United States of America. He died of complications from Alzheimer's Disease in 2005.

This biographical article is missing the person's: height weight
Retrieved from "https://www.baseball-reference.com/bpv/index.php?title=Agapito_Mayor&oldid=804807"
Categories: