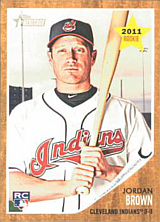 Brown hit .259/.262/.431 in part-time duty as a freshman at the University of Arizona. In 2004, the sophomore batted .306/.357/.553 with 57 RBI in 59 games. His 13 homers were four behind Pac-10 leader Jed Lowrie and Arizona made it to the 2004 College World Series. The next year, he hit .336/.377/.584 with 62 runs scored and 80 RBI in 60 contests. He led the Pac-10 in RBI, beating out numerous future major leaguers. He was one of four players to share All-Conference honors at first; John Mayberry Jr. and Jeff Larish were two of the others. Brown was 6th in NCAA Division I in RBI and was listed by several sources as a second-team or third-team All-American. Many of his RBI likely came from batting behind Trevor Crowe. The Cleveland Indians chose Brown in the 4th round of the 2005 amateur draft. He was their third first baseman taken, following Stephen Head (2nd round) and Nick Weglarz (3rd round); Weglarz was moved to the outfield quickly. Brown was signed by scout Joe Graham and reported to the New York-Penn League.

Brown debuted in the pro ranks with the Mahoning Valley Scrappers, hitting .253/.291/.387 in 19 games. In 2006, he moved up to the Kinston Indians and hit .290/.362/.469 with 7 triples, 15 home runs, 87 RBI and a .338 mark against southpaws. Playing outfield with Head at first, he had 10 assists and fielded .990. He led the Carolina League in RBI and tied Victor Mercedes for the most total bases (222). He was second to Mercedes in triples, fourth in slugging, third in average and helped Kinston win the league title. He made the All-Star team outfield alongside Beau Torbert and Carl Loadenthal and won the MVP award. Baseball America did not place him on their list of the circuit's top 10 prospects.

In 2007, Brown continued to shine. With the Akron Aeros, he produced at a .333/.421/.484 clip with 85 runs scored, 36 doubles and 11 steals (in 13 tries). He drew 63 walks while striking out 56 times and moved back to first base for most of the season. Brown led all Indians farmhands in average, OBP and hits (161) and Baseball America named him Indians Minor League Player of the Year. He led the Eastern League in hits and average (19 points over runner-up Brian Barton), was third in OBP (.11 behind leader Mark Kiger) and fourth in runs scored (12 behind leader Clete Thomas). He was named to the EL All-Star team at first base, was named the league's Rookie of the Year and, more importantly, its MVP. Brown led all of AA in batting average, tying Nate Schierholtz, Steve Pearce and John Raynor for 7th in the affiliated minors. Baseball America named him the best batting prospect and having the best strike-zone judgment in the EL. They also rated him the #11 prospect in the EL, between Collin Balester and Radhames Liz, and ahead of long time teammate Trevor Crowe, a former first rounder.

Jordan was called up to the majors on August 1, 2010, taking over as Indians' left fielder for Austin Kearns, who had been sent to the New York Yankees at the trading deadline. In his MLB debut, he played designated hitter and hit 6th between Matt LaPorta and Shelley Duncan. He batted against Jesse Litsch in the first and grounded out to Jose Bautista, finishing 0 for 4 in his first big league game. He played 26 games in the majors that year, hitting .230 with 7 doubles but no homers. In May 2011, he was purchased from the Indians by the Milwaukee Brewers, but spent the entire season in AAA, where he hit a solid .311/.346/.466 in 120 games between Columbus and the Nashville Sounds. The Crew released Jordan prior to the 2013 season, after his batting .306/.346/.440 with the Sounds in 2012, and he caught on in the Miami Marlins organization, batting .289/.346/.385 with New Orleans in 97 games. He made his final big league appearances that season, batting .200 in 14 games. His final professional season was 2014, which he split between two levels of the Texas Rangers system and with the Piratas de Campeche of the Mexican League.