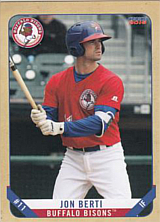 Jon Berti is an infielder who reached the big leagues in the last days of the 2018 season. His father, Tom Berti, played in the minors.

The Toronto Blue Jays picked Berti in the 18th round of the 2011 amateur draft, making him the highest draftee from Bowling Green since Nolan Reimold. The scout was Nick Manno. He debuted as a pro with the Vancouver Canadians, hitting .291/.387/.376 with 23 steals in 28 tries and 37 runs in 60 games. He fielded .974 at second base and led the Northwest League in times hit by pitch (12), was third in swipes (behind Jesus Galindo and Jace Peterson) and was 6th in OBP. He was named the loop's All-Star second baseman, joining Paul Hoilman (1B), Joe Panik (SS) and Jimmy Comerota (3B) and Travis Whitmore (3B) as the NWL All-Star infield.

He made his major league debut on September 26, 2018, starting at second base against the Houston Astros and going 1 for 3. He started the season with the AAA Buffalo Bisons, and after a couple of weeks his contract was sold to the Cleveland Indians organization. He hit .217 in 25 games for the Columbus Clippers, and was sent back to Toronto on June 8th. In the Jays organization, he hit .250 in 4 games for Buffalo and .314 in 72 games for the AA New Hampshire Fisher Cats, who won the Eastern League playoffs. His belated call up was seemingly a reward for being a loyal organizational soldier coming off a solid minor league season at age 28, as he was not considered a prospect. He was sitting at home in Troy, MI when he got the call, his presence being necessitated because both Devon Travis and Lourdes Gurriel were unavailable for the final four games of the year. He made the most of his unexpected opportunity, starting and hitting safely in all four games, and ending up batting 4 for 15 (.267) with a double and triple and 2 runs scored and driven in, showing that he could be a useful player. At season's end he was granted free agency.