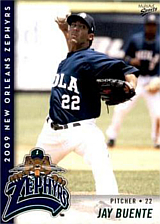 Jay Buente made 10 big league appearances with Florida based teams.

Buente began 2010 back with New Orleans and fared even better, going 0-1 with a 2.70 ERA in his first 19 games, with 35 strikeouts in 26 2/3 innings. He was called up to the big leagues to replace struggling Burke Badenhop. In his major league debut, on May 27, Jay replaced Ricky Nolasco at the top of the 5th after a long rain delay. He entered with a 3-2 deficit to the Atlanta Braves and began by retiring Chipper Jones on a grounder and Eric Hinske on a fly ball before walking Troy Glaus. Melky Cabrera then grounded out. In the sixth, he walked Yunel Escobar, who was bunted over. Pinch hitter Omar Infante singled home Escobar, then Taylor Tankersley relieved Buente. He pitched 8 games for the Marlins that season, with no record and a 6.55 ERA. In 2011, Jay was called up for his first major league start with Florida on May 22nd against the Tampa Bay Rays. He had gone 3-0, 1.94 in 10 games for New Orleans to start the year. He gave up 4 runs in 3 innings and was charged with the loss, yet he must have impressed his opponents since he was claimed off waivers by the Rays when the Marlins tried to outright him to the minors after the game. Jay pitched with the Durham Bulls and was 1-3, 5.70 in 24 games. The Rays also used him in one game, a two-inning outing in which he gave up 2 more runs on July 26th against the Oakland A's. He ended the season with a major league ERA of 9.00. On September 14th, the Rays released him to make room on their roster for young phenom Matt Moore. He finished his career with a stint in the minors for the Rays in 2012 and five games with the Lancaster Barnstormers of the Atlantic League in 2013.