Curtis Pride was diagnosed at nine months old as being born deaf, because his mother contracted rubella during pregnancy. He grew up in Silver Spring, MD, a suburb of Washington, DC, where he attended a school with special auditory classes until seventh grade, and then was mainstreamed. His parents wanted him to fit into the hearing world, so he was never taught sign language. Instead, he was taught to read lips. Showing his athletic ability, Pride was a starting guard for the College of William & Mary basketball team, which he attended while he was already playing minor league baseball, and a member of the U.S. junior national soccer team. 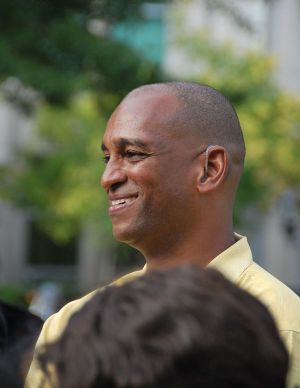 In 20 professional seasons, he played for 10 different organizations. He played in 1193 minor league games to go with 399 major league contests. He finished out his career in 2008 with the Southern Maryland Blue Crabs.

Pride and his wife Lisa started the Together with Pride foundation to benefit hearing-impaired children, and they run it from their home in West Palm Beach, FL. Pride gives many interviews by reading lips and responds well thanks to years of speech therapy. His words are generally clear due to hours in front of a mirror to make sure his mouth is formed properly for words. He uses a hearing aide in his left ear to provide enough amplification to hear some conversation and background noise. The PA system comes through as only a garble, and only partial crowd noise is distinguishable. "I didn't think that you can communicate with him as well as you really can," Salt Lake Bees manager Brian Harper said. "The first few weeks that I was around him, I was wondering if he understood. But he communicates just as well as anybody."

Pride was named the head coach for Gallaudet University, which is the country's only liberal arts college for the deaf, in 2009. Its baseball team had traditionally been very weak, even playing in Division III of the NCAA, but Pride tried to change that. He is an important role model for young deaf athletes, given his impressive level of achievement. The team achieved an all-time record of 27 wins in 2014.

Pride was named to the President's Council on Fitness, Sports and Nutrition in June 2010 by President Barack Obama. In January of 2016, he was named Major League Baseball's Ambassador for Inclusion, succeeding Billy Bean, who was promoted to Vice-President for Responsibility and Inclusion.