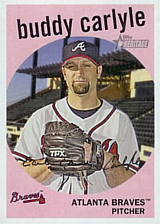 "The Braves gave me a second life as a baseball player when they signed me in '07. I'm proud that I've fought through the diabetes to be here. I know it's not a pipe dream to think I could be in Atlanta pitching the ninth inning tomorrow. You keep grinding, taking the ball, and getting outs, anything can happen. I used to be a guy who whenever someone else went up I'd beat my head against the 'why-not-me' wall. I'm long past that. I've packed enough cars going in both directions. to not worry about it anymore... You know what I've learned through all the years and all the moves? The stroller never fits in the car when you've packed everything else. I've left a lot of strollers behind in a lot of different places." - Buddy Carlyle, to John Feinstein, in the book Where Nobody Knows Your Name

Buddy Carlyle's big league career had three distinct acts, with plenty of Triple A time and stints in NPB and the KBO in between.

He was originally Cincinnati Reds property, chosen in the second round of the 1996 draft and signed for a $270,000 bonus. He moved to the San Diego Padres organization in 1998, making his debut by allowing 4 runs (only one earned) in 7 innings of a no decision against the Milwaukee Brewers on August 29, 1999. After 7 starts and 4 relief outings, the Pads sold him to the Hanshin Tigers after the 2000 season. In 31 games over parts of two seasons, the first of which he was a member of the Tiger rotation, he finished 7-12 with a 4.29 ERA and 124 strikeouts. He spent time in the Kansas City Royals and New York Yankees systems before joining the Los Angeles Dodgers prior to the 2005 season. Making the club out of spring training, he labored to an 8.36 ERA in 10 games before drawing his release.

But Buddy pressed forward. The Florida Marlins gave him a chance and he excelled in Triple A, with a 3-1, 1.93 record in 13 games. He got another big league chance... in that he got to play in the Korean big leagues; Florida selling him to the LG Twins of the KBO. Buddy finished 2-6, 3.25 in 32 games (3 starts) and headed back to the States to begin Act II of his big league journey. Roger McDowell, having coached Buddy in the minors in the past, was the new Atlanta Braves pitching coach entering 2007 and recommended giving Buddy a contract. Back in a rotation, he started hot with the Richmond Braves, going 5-2, 2.59 with 56 strikeouts in 8 games and earning a call up. A rotation option the rest of the year, he did not set the world on fire (8-7, 5.21 in 22 games) but he did win his first ball game in nearly eight years, allowing only one hit, a home run to Aaron Boone, in 7 innings to defeat his old pals the Marlins on June 5. He moved exclusively to relief in 2008 and excelled, with a 2-0, 3.59 record in 45 games.

All was not right in 2009. He felt funny during spring training and suddenly dropped twenty pounds in just over a week. After some tests, it was determined he was afflicted with type 1 diabetes. He began treatment with an insulin pen and actually made it back to the bigs for 16 games at the end of the year. But the results were discouraging (0-1, 8.86) and the Braves outrighted him off their roster, making him a free agent. He returned to NPB with the Hokkaido Nippon-Ham Fighters for a spell (0-3, 4.88 in 27 2/3 innings) and fought his way back to the bigs as a Yankee in 2011, making only 8 appearances (0-1, 4.70). Released in August to make room for fellow journeyman Raul Valdes, it was beginning to look like the end of the line.

But there was one more act to write. He endured in Triple A with the Braves (2012) and the Toronto Blue Jays (2013) before landing with the New York Mets in 2014. He shone in the hitter's haven that is Las Vegas, going 4-2, 2.16 with 3 saves in 33 1/3 innings to earn another shot. On May 31, after the Mets depleted their bullpen in a 14-inning game the previous day, Buddy came through with a three inning scoreless relief outing to earn credit for a 5-4 win over the Philadelphia Phillies, his first win since 2008 with the Bravos. He stayed with the Mets the rest of the year, going 1-1, 1.45 in 27 games in perhaps his finest big league work. He made the Opening Day roster in 2015 and, on April 6th, was pressed into action to close a 3-1 lead over the Washington Nationals when Jenrry Mejia felt something wrong in his elbow while warming up. Buddy recorded the only save of his career that day with a scoreless 2/3 of an inning. He was felled by injury in May, ultimately undergoing labrum surgery in July. Though he did not know it yet, his career was over and he was released during spring training 2016.

In 150 games at the big league level, Buddy finished 13-13 with a 5.14 ERA, one save, and 232 strikeouts in 292 1/3 innings. A few months after his Mets release, he became a Braves coaching assistant, moving along to become pitching coach with the Double A Mobile BayBears of the Los Angeles Angels system in 2017.

Sources for this article include: Where Nobody Knows Your Name by John Feinstein