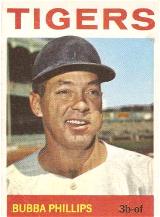 Phillips was obtained by the Detroit Tigers from the Stroudsburg Poconos of the North Atlantic League before the 1949 season. After leading the 1952 International League in outfield assists, he missed the 1953 and 1954 seasons serving in the military during the Korean War. He made his big league debut on April 30, 1955 with the Tigers at the age of 27 and wearing number 11. He spent most of the year coming off the bench, but he still managed to hit .234 with three home runs and 23 RBI in 95 games (184 at-bats).

After the 1955 season, he was traded from the Tigers to the Chicago White Sox for Virgil Trucks. He spent his first season with the White Sox, 1956, as a bench warmer, being used mostly as a pinch hitter/defensive replacement. He hit .273 that year, with 2 home runs and 11 RBI.

In 1957, Phillips became the White Sox starting third baseman. In 121 games that year, he hit .270 with seven home runs and 42 RBI. He also walked 28 times and struck out only 32 times. He took the starting job from Fred Hatfield, who ended up hitting only .202 that year.

In 1958, Phillips spent time almost evenly at third base and in the outfield, playing only 10 more games at third that in the outfield. In 84 games that year, he hit .273 with five home runs and 30 RBI. He was a consistent hitter who did not walk much but did not strike out much either. In fact, in 1958 he walked 15 times and struck out only 14 times.

In 1959, he reclaimed his starting job at third base from Billy Goodman. He hit .264 with 5 home runs, 40 RBI, 27 walks and 28 strikeouts that year. Placing seventh in the American League in intentional walks with 7 and ninth in the league in doubles with 27. He also did well in the World Series that year, hitting .300 in 10 at-bats against the Los Angeles Dodgers.

After the 1959 season, Phillips was traded to the Cleveland Indians with Norm Cash and Johnny Romano for Minnie Minoso, Dick Brown, Don Ferrarese, and Jake Striker. His first season with the Indians, 1960, was the worst of his career. He batted only .207 with 4 home runs. He even ended up having to relinquish time at third to other players on the team, mostly Ken Aspromonte. He rebounded in a big way in 1961, finding a power stroke that led him to hit 18 home runs, including the only two grand slams of his career. He finished the season with a .264 average and 72 RBI. He ended up finishing in 17th place for MVP voting in 1961.

1962 was not nearly as successful as 1961, but it is still noteworthy. He hit 10 home runs with 54 RBI and a .258 batting average. He was also part of a rare back-to-back-to-back home run feat, in which Jerry Kindall, himself and Jim Mahoney all connected in succession off of pitcher Bill Stafford on June 17th. After the season, he was traded to the Detroit Tigers, his original team, for Ron Nischwitz and Gordon Seyfried. He was the Bengals' starting third baseman for a year - 1963, but he hit only .246 with 5 home runs (although he did steal a career high 6 bases and lead the league in sacrifice flies with 10).

In 1964, he lost his starting job to a young Don Wert. He wrapped up his big league career that year by hitting .253 with 3 home runs and 6 RBI. He played his final big league game on September 6th of that year.

Overall, he hit .255 with 62 home runs and 356 RBI over his 10-year career. He walked 182 times and struck out only 314 times in 3,278 at-bats. He was a .964 career fielder. He collected his final hit off Gerry Arrigo and his final home run off Dave Stenhouse. According to Baseball-Reference, the player he is most similar to statistically is Mike Shannon. He was a teammate of Barry Latman for six seasons, longer than any other teammate.

He mostly wore number 5 during his career, although during part of the 1960 season he wore 7 and during his final two year he wore 1.

He died in 1993 and is buried at Cedarlawn Cemetery in Philadelphia, MS.