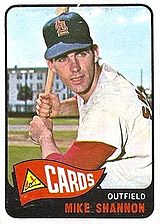 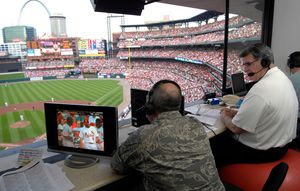 Shannon (right) in the broadcast booth

Bob James pointed out in one of his Baseball Abstracts that Shannon was one of a very small number of outfielders to make a successful transition to third base. Until 1966, he played exclusively in the outfield (except for a handful of games at catcher), then starting in 1967, he was almost exclusively a third baseman. While many teams have pushed an outfielder to make such a transition, usually to have an extra bat in the line-up, it is very rare that it works successfully.