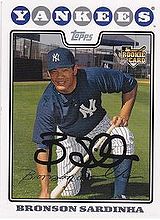 Bronson Sardinha hit .391 as a high school senior. Scouted by Gus Quattlebaum, the New York Yankees took him with the 34th pick of the 2001 amateur draft and signed him for a $1,100,000 bonus. At the time, it was the highest any Hawaii high schooler was drafted. A shortstop in high school, Sardinha has played short, third and the outfield in the minors. He is the brother of Dane Sardinha and Duke Sardinha. He moved through the system at a normal pace spending roughly one year at every level, except AA where he played for two seasons.

Assigned to the GCL Yankees, he hit .303/.398/.473 with 11 steals in 13 tries. He led the Gulf Coast League with 42 runs (in 55 games), was 8th in average and was honored as the GCL All-Star shortstop. Baseball America rated him as the GCL's #3 prospect after Chad Petty and Anderson Hernandez.

At age 19, Sardinha hit .263/.334/.406 with 15 steals in 21 tries for the Greensboro Bats but fielded just .889 at shortstop, far less than the other player they tried there, Robinson Cano. Shortly after the short-season leagues began, he was demoted to the Staten Island Yankees in part to learn the outfield. He hit .323/.433/.484 in 36 games, helping Staten Island to a title. Had he qualified, he would have edged Jorge Cortes for the New York-Penn League OBP lead and ranked 4th in average. As Cano had been demoted with Sardinha, other managers accused George Steinbrenner of adding talent for the pennant run. Baseball America rated him the #4 prospect in the NYPL, ahead of teammates Chien-Ming Wang (#6) and Cano (#11).

He started the 2007 season with the Scranton/Wilkes-Barre Yankees and hit only .222/.306/.387 and 11 home runs in 109 games. He spent some time back at Trenton, where he hit .429 with 4 home runs in 15 games. In spite of his poor offensive production in AAA, he was recalled by the Yankees in September, making his Major League debut on September 15th against the Boston Red Sox during a quadruple switch. He got his first at-bat against Bryan Corey with Hideki Matsui on first base and one out in the top of the 9th and grounded into a game-ending double play. He played 10 games for New York, going 3 for 9 with 6 runs scored. He was on the roster for the postseason, and got into one game in the Division Series which the Yankees lost to the Cleveland Indians. In Game 2 on October 5th, he replaced left fielder Johnny Damon with one out and runners on second and third and the score tied at 1-1 in the bottom of the 11th. Manager Joe Torre decided to give an intentional walk to Grady Sizemore to load the bases and had Bronson playing as a fifth infielder in order to maximize the chances of cutting off the winning run at the plate. The strategy almost worked, as Asdrubal Cabrera popped up to first base, but with the defense back in its normal alignment, Travis Hafner ended the game by hitting a single to right, allowing Kenny Lofton to score. It was the last major league appearance of Sardinha's career.

He became a free agent after the 2007 season and signed with the Seattle Mariners but was released on April 18, 2008 after just 9 games with the Tacoma Rainiers. He finished the season in the Cleveland Indians system, spending time both in AA with the Akron Aeros and AAA with the Buffalo Bisons. In 109 games between the three stops, he hit .279/.352/.408 with 8 homers and 56 RBIs. He then did not play at all in 2009, but came back in 2010 and 2011 in the Colorado Rockies organization, spending both seasons at AA with the Tulsa Drillers of the Texas League. He hit .299 in 81 games the first year and .302 in 82 games the second, hitting 10 homers both years. He retired after the 2011 season, having spent 10 years in the minors.