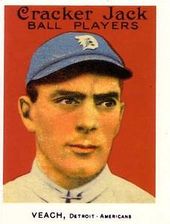 Bobby Veach was an excellent player who quite possibly would have been in the Hall of Fame had his career lasted longer. He had a career average of .310, and the Gray Ink method of Hall of Fame appraisal shows him with more points than the average Hall of Famer.

Veach spent most of his career with the Detroit Tigers at the time of Ty Cobb. Besides Cobb, he played in the Detroit outfield alongside Wahoo Sam Crawford, Harry Heilmann, and Heinie Manush, all Hall of Famers. Both the Cobb/Crawford/Veach outfield and the Cobb/Heilmann/Veach outfield have been said to be among the best of all time. Veach was the cleanup hitter on those teams, and stood among the American League leaders for runs batted in during most of his career. These great totals are in part the result of having great hitters in front of him, the afforementioned Cobb and Heilmann, but also the underrated Donie Bush who had excellent on-base percentages as the Tigers' leadoff hitter. Veach was an above-average fielder, and while he did not often lead the league in hitting categories, he was in the top ten in batting average six times, in the top ten in slugging five times, and in the top ten in RBI ten times (leading the league three times). He tended to steal around 20 bases a year. 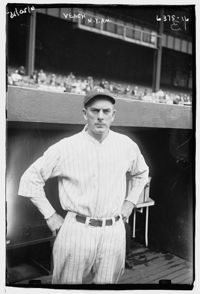 While Veach's prime was spent during the Deadball Era, his playing style was not typical of the period: he was a slugger, who held the bat from the end of the handle and swung for power; he had no use for the type of "scientific hitting" preferred by Cobb, as he was not one to try to choke up on the bat, bunt, or hit-and-run or other strategies favored by hitters of the time. His differences with Cobb also ran to temperament as he was a laid-back person who took things in stride, in contrast to Cobb who saw life as a no-hold barred competition.

He was of Irish origin, growing up in Madisonville, KY in a family of coal miners. He was a late-comer to baseball, not starting to play until his teenage years, and not reaching the upper minors until age 24, when he had a brief stint with the Indianapolis Indians of the American Association before making his debut with the Tigers late in 1912. He spent his minor league apprenticeship mostly with the Peoria Distillers of the Three-I League and the Kankakee Kays of the Northern Association where he was a pitcher before switching to the outfield. In his first taste of The Show, he hit .342 with 15 RBI in 23 games and never looked back.

In January of 1924, Veach was sold to the Boston Red Sox and he finished out his career playing decently for them in 1924 - he .295 and drove in 99 runs - and for three teams in 1925. His only post-season appearance was for the Washington Senators in the 1925 World Series, when he had one at-bat. It was to be his last major league appearance. He did continue to play in the minors for a few years though, with the Toledo Mud Hens of the American Association from 1926 to 1929, and with the Jersey City Skeeters of the International League in 1930. Veach's manager while in Toledo was a playing manager by the name of Casey Stengel. He won the AA batting crown with a .382 average at age 40 in 1928. After hanging up his glove, he moved back to Detroit where he purchased an interest in a coal company. He underwent a serious abdominal operation in 1943 and was never fully healthy afterwards. He died at home on August 7, 1945.

The similarity scores method shows the most similar player to Veach as Dixie Walker, but perhaps a more valid comparison would be to his contemporary Sherry Magee.

According to a 1930 news article, his son, Robert Veach, played for the Rochester Red Wings briefly before dying in an automobile crash at the age of 18.[1]