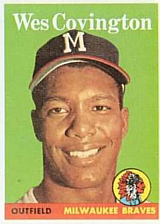 “You can’t afford to take press clippings seriously... You have to make the club on the field, not in the newspapers, and you have to do it on your own. I’m not going to try to be another Aaron or another anybody else.” - Wes Covington, 1956

With the Phils, Wes found a home, becoming one of the first African-American contributors on a team that had been loath to integration. He may have been limited due to Gene Mauch's platooning, something he found himself at odds with the skipper over, but he played 100 games each year from 1962 to 1965. The best of his Phillie seasons may have been 1963, in which he batted .303/.354/.521 with 17 home runs and 64 RBI in 119 games. His bat was quiet during the Philly fall from grace at the end of 1964 and he asked for his release after a contentious 1965. He finished his career in 1966 playing a few games with the Cubs and Dodgers. In fact, his last appearance came in the 1966 World Series with the Dodgers, striking out against Moe Drabowsky in Game 1. Per similarity scores, his closest match is Jerry Lynch, best known for his work as a pinch hitter.

After his playing career, Covington moved to Canada. He worked for nearly 20 years for the Edmonton Sun newspaper and then for the Edmonton Trappers baseball team. In 2003, he returned to Milwaukee for the first time in nearly 40 years. He died of cancer at 79.