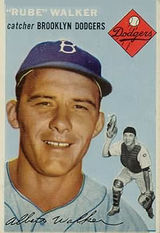 "I shared the ride in to Ebbets Field, maybe 15 minutes away, with Ed Roebuck, Pee Wee, Erskine, Rube Walker. It was just so much fun." - Don Zimmer, talking about commuting to the ballpark in the mid-1950's with Rube Walker and other Dodgers

Rube Walker played 11 seasons as a catcher, never playing any other position in the majors and never getting more than 213 at-bats in any one season. He spent 3 1/2 seasons with the Chicago Cubs before playing the rest of his major league career with the Brooklyn and Los Angeles Dodgers. He backed up Roy Campanella for years.

Although Walker was on several World Series teams, he appeared in only the 1956 World Series.

Walker was released in June 1958 by the Dodgers and coached them for the rest of the season. In 1959 he began the year as player/manager of the independent Houston Buffs, but was replaced on June 21st and played for the St. Paul Saints the rest of the season. He managed in the minors from 1961 to 1964. Walker was later a coach for the Washington Senators (1965-1967), New York Mets (1968-1981), and Atlanta Braves (1982-1984). Although Walker had been a catcher, as a coach he was a pitching coach. He coached the pitching staff of the famous 1969 Mets team that won the World Series.

His brother, Verlon Walker, was a long-time Chicago Cubs coach.