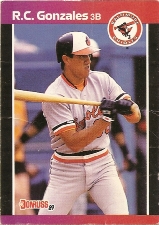 His family moved to California and he went to Rosemead High School, then attended Glendale Community College and finally UCLA. In 1980, he was All-Conference as a shortstop while at Glendale CC. In 1982, he was a second team All-Conference at Cal State. In the 1982 amateur draft, he was picked by the Montreal Expos in the 5th round.

Scouted mostly for his solid defence, Gonzales was sent straight to AA ball upon signing, with the Memphis Chicks in the Southern League where he was the main shortstop in the second half of the season. His offensive numbers were poor with a line of .213/.262/.257 in 55 games.

With Argenis Salazar taking over at short with the big league club to begin the 1984 season, Gonzales took over the AAA shortstop position with the Indianapolis Indians. His offensive numbers were not spectacular but his defensive play was steady. In late July, he was called up by the Expos as Salazar had completely failed to hit. He made three appearances before being sent back to AAA, but not for long. He was back in mid-August and remained with the team for the rest of the month, being used as as a late-game replacement. The Expos then sent him to Indianapolis so he could take part of the team's run in the American Association playoffs. He got his first start with Montreal in mid-September. In his second start on September 16th, he had 4 hits against the Philadelphia Phillies in an 8-4 win. He started 9 of the team's last 16 games. With Indianapolis, his line was .234/.275/.295 in 114 games. His OPS was similar with Montreal in 29 games.

The 1986 season was his best in the Expos organization. He played 116 games with Indianapolis but this time, was used almost equally between short, second and third, as the Expos were grooming him to become a utility infielder at the big league level. His line was .273/.342/.342. He was called up briefly in July, making 3 starts and going 1 for 10. He was back with Montreal in September making 4 more starts. Overall, he hit only .115 with the Expos in 11 games. It was his last year in the Montreal organization. In December, he was sent to the Baltimore Orioles to complete a June trade when the Expos had acquired pitcher Dennis Martinez.

It was with Baltimore that Gonzales established himself in the majors. He first made the big league team out of Spring training in 1987. He was used sparingly, mostly for defence purposes, and didn't start his first game before May. Because Cal Ripken was entrenched at shortstop and hardly ever missed an inning, most of his playing time came elsewhere. He was hitting only .207 with an OPS below .600 when he was sent to the AAA Rochester Red Wings, in the International League. He was back with Baltimore in September and did well, hitting .323 with a .795 OPS in 13 games, including 7 starts.

He was left off the 40-man roster the following winter but nobody picked him. He won back his job in Spring training in 1990 in what was his last season with Baltimore. It was more of the same, playing as an infield substitute. In 67 games, he made only 28 starts, with a line of .214/.296/.291. In January, he was traded to the Toronto Blue Jays for minor leaguer Rob Blumberg.

Gonzales had his worst offensive campaign in 1991 with the Jays. His OPS was only .535 in 71 games (35 starts), hitting only .195. He had to settle for a minor league contract with the California Angels in February. He hit well enough to win a job in Spring training in 1992 (.333) but when told he would begin the season in the minors, he was very reluctant. He finally went but once with the Edmonton Trappers, he was told to go back to Los Angeles as the Angels had just traded Dick Schofield. Gonzales made the most of that opportunity with the best offensive season of his career with a line of .277/.363/.398 in 104 games, including 96 starts. Unfortunately for him, his season was cut short in August when he suffered a broken arm. He nonetheless established career highs in many categories, including home runs (7), runs (47), hits (91) and RBIs (38). After such a good season, Gonzales was in a position to negotiate a good contract. In December, he signed a two-year $1.5 million agreement with the Angels.

In 1993, he played a career-high 118 games, with a line of .251/.346/.319. It was the second straight season when Gonzales showed a marked improvement in place discipline, garnering 49 walks, a career-best. He played mostly at third base but filled in also at first base in August. After the season, the Angels decided to buy the option year on his contract, making Gonzales a free agent. He had to wait until February before settling for a minor league deal with Baltimore.

Gonzales couldn't crack the Orioles' roster in Spring training in 1994 and was released just before the season began. He signed right after that with the Cleveland Indians organization and he began the season with the Charlotte Knights, in the International League. He was called back in May and spent two months with the Indians before being designated for assignment in mid-July. He made only 4 starts during his two-month time with Cleveland, hitting .348 in 23 at-bats.

He was back with the Angels organization in 1995, signing only in April, just in time to join the team for the abbreviated Spring training after the end of the players' strike. But in the following days, Gonzales strained his rib cage and the Angels asked him to join their minor league complex. After 5 games with the Midland Angels in the Texas League, he was assigned to the Vancouver Canadians, in the Pacific Coast League. He did well: in 50 games, his line was .273/.370/.418, showing again his tendency to get on base via walks. He was called back in August and spent the rest of the season with the Angels as a sub, starting only 4 games as the team was battling the Seattle Mariners for the AL West title, a fight that was won by the Mariners in a one-game playoff after both teams finished tied.

In January of 1996, he signed a minor league contract with the Texas Rangers. He began the campaign with the Oklahoma City 89ers, in the PCL. In 42 games, his OBP was .370 with a .260 batting average. The Rangers called him up in May and he remained with Texas the rest of the season, his last extended stretch of time in the majors. In 104 games, he made 22 starts with a line of .217/.288/.326. In December, he accepted a minor league contract with the San Diego Padres. He played only 13 games with the AAA team, the Las Vegas Stars, when he was released in April. He was picked up by the Colorado Rockies in May and spent most of the season with the Colorado Springs Sky Sox in the PCL. He was called up in September and made two appearances as a pinch-hitter, his last two games in the majors.

Gonzales played with two organizations in 1998, first with the Chicago White Sox. He was invited to Spring training but was assigned early to the Calgary Cannons, in the Pacific Coast League. He was released in mid-May avec hitting .205 in 15 games. In early July, he joined the Texas Rangers organization and finished the season with Oklahoma City where again, his main offensive asset was his walk ratio (36 in 62 games). His line was .219/.343/.327.

In 1999, Gonzales played in the Mexican League with the Reynosa Broncos and finished the season with the New Orleans Zephyrs in the PCL, a Houston Astros affiliate.

In 2007, Gonzales was named manager of the Milwaukee Brewers' affiliate in the Arizona League. He managed the next two seasons with the Helena Brewers in the Pioneer League.

His father, Ben Gonzales, played in the minors from 1956 to 1960 in the St. Louis Cardinals and Pittsburgh Pirates organizations.