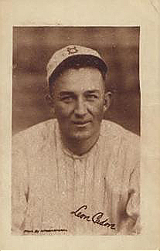 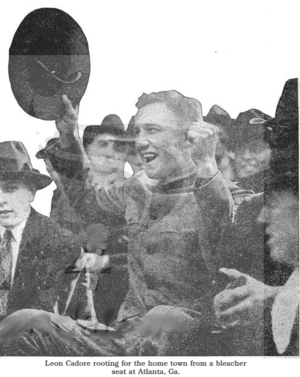 Pitcher Leon Cadore played a decade in the majors, primarily with the Brooklyn Robins, and won 68 games. He is best remembered for going the distance in the longest game in major league history.

Prior to embarking on a pro career, he played at Gonzaga from 1906 to 1908 (although that would mean he started there at age 14 or 15). He became the first player from the school to reach the majors when he joined Brooklyn in 1915, going 0-2 with a 5.57 ERA in 7 games. With the Montreal Royals the following year, he won 25 games to lead the International League. Cadore went 13-13 with a 2.45 ERA in 37 appearances with Brooklyn in 1917 but missed most of the following season while serving in the Army in World War I. He returned to win 14 games for the Robins in 1919 and a career-best 15 games in 1920.

On May 1, 1920, Leon pitched 26 innings in a game against the Boston Braves. He gave up just 1 run and 15 hits while striking out 7 before the game was finally called on account of darkness (and scored as a tie). Opposing pitcher Joe Oeschger also went the distance. It is said that Cadore faced 96 batters and spent the next 36 hours in bed. The Robins played in the 1920 World Series against the Cleveland Indians, and Cadore started Game 4. However, he gave up 2 earned runs in just an inning and took the loss to Stan Coveleski. Cadore won 13 games in 1921 but his fortunes declined after that. He was waived in 1923 and picked up by the Chicago White Sox. He ended his career with the New York Giants in 1924.

After his playing days, Cadore married Mae Ebbets, the daughter of former Brooklyn owner Charles Ebbets. She died in 1950, and he passed away in 1958 at age 66.