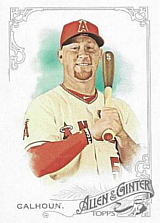 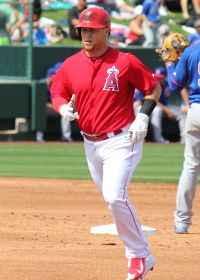 Kole Calhoun is a 2015 Gold Glove winner who mashed 33 home runs in 2019, all during his patrol of the Los Angeles Angels outfield. The club's 2011 Minor League Player of the Year, he joined the Arizona Diamondbacks as a free agent following the '19 season.

In his pro debut with the 2010 Orem Owlz, Kole hit .292/.411/.505 with 39 walks, 43 runs scored and 42 RBI in 56 games, gunning down 9 runners from the outfield. He tied Randall Thorpe for 4th in the Pioneer League in walks. He was even better in '11, posting a .324/.410/.547 line with 94 runs scored, 99 RBI, 36 doubles, 6 triples, 22 home runs, 73 walks and 20 steals (in 30 tries) for the Inland Empire 66ers. He was among the California League leaders in total bases (280, 3rd behind Angelo Songco and Gary Brown), average (6th), hits (166, 4th between Songco and Josh Rutledge), doubles (tied for 6th), triples (tied for 10th), homers (tied for 6th with Nathan Freiman, Kody Hinze and Tommy Joseph), RBI (5th), runs scored (7th), walks (6th between Jarrett Parker and Hinze), OBP (4th between Rutledge and Brown), slugging (4th between Songco and Choice) and OPS (3rd behind Jedd Gyorko and Kent Matthes). He was named to the league All-Star team as a utility man, the outfielders picked were Choice, Brown and Matthes, and was named the Angels' Minor League Player of the Year, leading Halo minor leaguers in home runs, slugging, hits, total bases and walks (tied) and finishing second in RBI (one behind Jeff Baisley). Baseball America did not name him among the California League's top 20 prospects. Calhoun began 2012 with the Salt Lake Bees and was at .296/.365/.491 with 14 doubles, 30 runs and 31 RBI in 43 games. He was then called up to the majors with Vernon Wells and Ryan Langerhans going on the DL.

In his debut, Calhoun entered as a 9th-inning defensive sub in right field for Mark Trumbo on May 22, 2012 and played a quiet inning in a 5-0 win over the Oakland A's. The theme of 2012 seemed to be "quiet" at the big level, as he hit just .174 in 21 games with a skinny extra base hit (a double). In 2013, he played 58 games, hitting .282 with 8 homers and 32 RBI for an OPS+ of 128. That put him in line for a starting job in 2014 as he took over as the starting right fielder. He played 127 games, during which he hit .272 with 31 doubles, 17 homers and 58 RBI, while scoring 90 runs. All of those runs scored resulted from the fact that he was largely used as the lead-off hitter, as the Angels lacked a player with a more typical skillset for the role. Once again, his OPS+ was excellent at 121, while the Angels put up the best record in the American League. Unlike most of his teammates, he was not muzzled in the ALDS, going 5 for 15 in three games against the Kansas City Royals; the Angels were still swept in three games.

On April 23, 2015 he had the Angels' only hit in a 2-0 win over the Oakland Athletics, a home run off Jesse Chavez in the 3rd inning after Drew Butera reached on an error. Calhoun won a Gold Glove as the American League's best defensive right fielder that season and reached the 20 homer mark for the first time, hitting .256 with 26 homers and 83 RBI. That was the first of a string of five straight season in which he started almost every day in right field for the Angels (he played over 150 games in four of the five seasons) and hit well, if not spectacularly. The exception was 2018, when he batted just .208 after an awful first half which saw him hit just .187. He was just below 20 homers every year from 2016 to 2018, then, in 2019, reached a personal best with 33 long balls. He generally hit towards the top of the order, thanks to his ability to draw walks, and scored over 90 runs in both 2016 and 2019 . The Angels failed to return to the postseason after their quick exit in 2014, even with the best player in the universe, Mike Trout, hitting in the middle of the lineup.

Following the 2019 season, Calhoun became a free agent and, on December 30th, signed a two-year deal with his hometown team, the Arizona Diamondbacks, worth $16 million. The Diamondbacks had played the previous year with a patched together outfield and needed a reliable, if unspectacular, player like Calhoun to consolidate the position. On August 5, 2020, he made the highlight reels when he hit a line drive into the right field corner at Chase Field in the 4th inning of a game against the Houston Astros. The ball hit an angle of the wall and rolled quickly along the warning track past RF George Springer and towards center field, where, by the time CF Myles Straw picked it up, Kole had been able to circle the bases with an inside-the-park homer. It also scored Ketel Marte from first base and started a nine-run inning in what ended up as a 14-7 win by the Diamondbacks. He was involved in another weird play on August 24th, against the Colorado Rockies, when caught in a rundown between first and second, he was hit in the helmet by a throw from C Tony Wolters, who was backing up first base, to second base. He was called out for interference, even though he did not get out of the baseline and barely moved his head. Manager Torey Lovullo was incensed and argued the call, but did not win the argument and in fact was ejected. After the game, Calhoun admitted that the umpires were right and that he had deliberately put his head in the way of the ball, knowing he would be thrown out anyway.