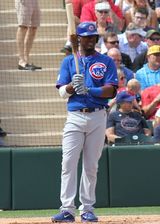 Junior Lake made the major leagues in 2013.

Lake was used as a center fielder in his MLB debut after being an infielder throughout the minors. Hitting 6th against the Rockies, he doubled off Jorge De La Rosa in his first at-bat. He stole third. He added two more singles later (one off De La Rosa, one off Matt Belisle) for a 3-for-4 debut. He started his major league career 9 for 17 with a double and a home run. He ended up playing 64 games for the Cubs, hitting .284/.332/.428 good for an OPS+ of 106; he played exclusively in left field and center field, getting 56 starts between the two positions. Lake had a career day early in the 2014 season; unfortunately, it was too early to count. On March 23rd, he hit three homers and collected 6 RBI in a 10-6 Cactus League win over the Oakland Athletics. He platooned in left field for the Cubs when the regular season started, and when he had his next big day, it did count: on May 12th, he homered, doubled twice and drove in 6 runs to lead the Cubs to a 17-5 drubbing of the St. Louis Cardinals. He played 108 games for the Cubs, splitting his time between left and center field. he only .211, but with 10 doubles and 9 homers, 30 runs scored and 25 RBIs. An awful K/W ratio of 110/14 really hampered his value, however, as his OPS+ was only 65. He then played sparingly in 2015, getting into 21 games and collecting only 54 at-bats with the Cubs over the first four months, during which he hit .224. He also played 58 games with Iowa, where he hit a solid .315 with 7 homers and 31 RBIs. On July 31st, he was sent to the Baltimore Orioles for veteran pitcher Tommy Hunter in a rare trading deadline deal that involved two contenders swapping major league players. The Orioles fell out of contention rather quickly, however, and Junior played only 8 games for them, going 3 for 22 (.136). He did hit .300 in 15 games for the AAA Norfolk Tides. The Orioles placed him on waivers after the season and on December 18th, he was claimed by the Toronto Blue Jays.