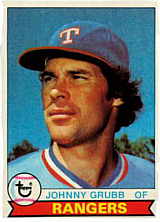 "Mild-mannered behind his glasses, Grubb was square-jawed and handsome like Clark Kent." - from a December 2006 article about Johnny Grubb in Baseball Digest

Johnny Grubb played 16 seasons in the major leagues, posting a respectable .278 career batting average. He appeared in the 1984 World Series and was on one All-Star team.

Johnny was born in Richmond, VA and went to Meadowbrook High School. In 1968, he was a member of the Manatee Junior College National Champion team. He attended Florida State University in 1970, and as of 2010 is one of only three major leaguers out of Florida State with at least 4,000 major league at-bats. The 1970 Florida State team went all the way to the finals of the College World Series before losing to USC.

Although he was naturally a right-handed hitter, Johnny Grubb learned to bat lefty by imitating his idol, Mickey Mantle.

Johnny was picked in the secondary phase of the 1971 amateur draft by the San Diego Padres, his 4th time being drafted, and that summer hit .308 for the Lodi Padres. In 1972 he hit .296 for the Alexandria Aces and broke into the majors in September. He hit .333 in 21 at-bats.

Grubb spent four years as a regular with the Padres. In perhaps his best year, as a rookie in 1973, he hit .311 and was sixth in the Rookie of the Year voting. Dave Winfield joined him in the Padres' outfield, going to the majors straight out of college in mid-season. Grubb made his lone All-Star appearance in 1974, when he hit .286 in 140 games.

Johnny was with the Rangers during all of 1979 to 1982, hitting reasonably well most seasons and getting 300+ at-bats each year except in the 1981 strike season when he had 200+. He then was traded to the Detroit Tigers and played his last five major league seasons for them, appearing in the 1984 World Series. He had some good years with the bat in Detroit, most notably 1986 when in 81 games he hit .333 with 13 home runs at age 37. His last major league appearance was in postseason play in the 1987 ALCS, when he went 4-for-7 as the Tigers lost to the Minnesota Twins.

In 1989, he played for the Orlando Juice of the Senior Professional Baseball Association. He hit .305 with 4 homers in 42 games with the club.

Grubb was a player/coach for the Richmond Braves in 1988 and coach for the team in 1989-1991. He coached under manager Phil Niekro with the women's Colorado Silver Bullets team. He became coach at his old high school, and one of his players was Cla Meredith.

During his career he went on the disabled list nine times. He hit best against pitcher Paul Hartzell, going 10-for-17. The two most similar players through 2006, according to the similarity scores method, are Orlando Merced and Bob Skinner.