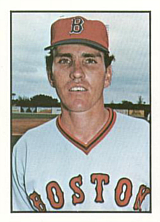 “Warming up, my whole body went numb. It was surreal, like an out-of-body experience. In those days, they’d send a golf cart to bring you in, and when it came for me, I knew I couldn’t ride in it. I had to trot in from the bullpen just to feel my feet on the ground. Otherwise, I might have floated away.” - Jim Burton, to author Doug Hornig, on his Game 7 memories in the book The Boys of October

Jim Burton is most famous for being the losing pitcher in Game 7 of the 1975 World Series, pitching for the Boston Red Sox against the Cincinnati Reds.

Burton was on Team USA for the 1970 Amateur World Series, winning a Silver Medal. He made his major league debut for the Sox in midseason 1975, pitching 29 times with a record of 1-2, 2.89 and a save. He and fellow youngster Dick Pole were considered the last men on the pitching staff during the postseason, but the grinding World Series took a toll on pitchers and Darrell Johnson decided to use Jim to start the top of the 9th inning in Game 7, with the score knotted at 3. Jim had only pitched a third of an inning in the Series, but he was already the Sox's fourth pitcher of the night, following starter Bill Lee and relievers Roger Moret and Jim Willoughby, who had been lifted for a pinch-hitter in the bottom of the 8th. Burton walked Ken Griffey, then Cesar Geronimo moved him to second on a sacrifice bunt. He managed to get pinch-hitter Dan Driessen on a ground ball for the second out, but Griffey moved to third. Jim walked Pete Rose and then Joe Morgan followed with a single to center, driving in Griffey with what proved to be the winning run. Reggie Cleveland replaced Burton and got the last out, but Boston went down in order against Will McEnaney in the bottom of the 9th to end the game and saddle Jim with the loss.

Burton only pitched one more major league game after that momentous outing, pitching in mop-up relief on September 17, 1977 in an 11-2 loss to the Baltimore Orioles. He ended his brief major league career with an excellent 2.75 regular season ERA. The following year, he was traded to the New York Mets for utility infielder Leo Foster at the end of spring training, but he never made it back to the bigs. Burton died in December 2013 at the age of 64.