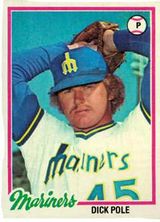 Dick Pole, a long-time pitching coach, pitched six seasons in the major leagues, primarily as a starter. He appeared in Game 5 of the 1975 World Series with the Boston Red Sox.

He also spent ten seasons in the minors, including several seasons with the Pawtucket Red Sox where he was a teammate of Jim Rice and Cecil Cooper.