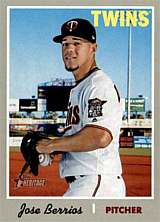 José Berrios was a supplemental first-rounder in the 2012 draft. The Minnesota Twins took him 32nd, the first supplemental pick, as compensation for the loss of Michael Cuddyer. He was the second Puerto Rican picked, following #1 choice Carlos Correa, and the second of three Twins first-rounders (after Byron Buxton and before Luke Bard). Berrios was timed as high as 96 mph on his fastball in high school and also had a hard curveball and a changeup with movement. He signed and made his debut with the GCL Twins on June 29th.

Berrios concluded his first year undefeated, and the best that there can be, earning 3 wins with a collective ERA of 1.17 between the Gulf Coast League and the Appalachian League, where he pitched for the Elizabethton Twins. In 2013, he was the youngest member of the Puerto Rican national team that reached the finals of the 2013 World Baseball Classic, then spent the entire season with the Cedar Rapids Kernels of the Midwest League, going 7-7 with a 3.99 ERA in 19 starts. He struck out 100 in 103 2/3 innings and was over two years younger than the average player in the circuit. In 2014, he began the season with the Fort Myers Miracle of the Florida State League, where he was 9-3, 1.97 in 16 starts. He was selected to start the 2014 Futures Game for the World team, then earned a promotion to the AA New Britain Rock Cats and, for good measure, also worked in AAA for the Rochester Red Wings before the season was out. Overall, his record was 12-8, 2.77 in 25 starts, with 139 2/3 innings pitched, 140 strikeouts and only 38 walks. Berrios hoped to make the Twins pitching staff out of spring training in 2015, but instead went back to AA, this time with the Chattanooga Lookouts of the Southern League. He was 8-3, 3.08 in 15 starts to earn a midseason promotion to Rochester. For the second straight year, he was named the World team's starter in the Futures Game. Like he had in 2014, he pitched scoreless innings to get things started. He earned his promotion to the AAA Red Wings after the All-Star break, where he went 6-2, 2.62, the rest of the way. That gave him a combined record of 14-5, 2.87 with 175 strikeouts in 166 1/3 innings. He went to spring training in 2016 again hoping to make the Twins' Opening Day roster, but was sent back to Rochester where he was a dominant 2-0, 1.06 in his first three starts, with 20 strikeouts and only 8 hits allowed in 17 innings. On April 26th, he received the inevitable call to the big leagues.

Berrios was not dominant in his big league debut on April 27, 2016, as he gave up 5 runs on 6 hits in 4 innings and was charged with Minnesota's 6-5 loss to the Cleveland Indians. He earned his first career win in his next start, May 2nd, against the Houston Astros, when he gave up 2 runs in 5 1/3 innings while striking out 8. After a no-decision, he was lit up in his fourth start against the Detroit Tigers on May 16th, when he gave up 7 runs without getting out of the first inning in a 10-8 loss. The following day, the Twins sent him back to AAA for more seasoning, with his ERA at 10.20 in 15 innings, belying a 1-1 record. In all, he made 14 starts in the majors, going 3-7, 8.02. He gave up 74 hits and 35 walks in 58 1/3 innings. He started the 2017 season in the minors, but was excellent in his first major league start on May 13th, when he pitched into the 8th inning, giving up only 2 hits, defeating the Cleveland Indians, 4-1. He followed on May 18th with 7 2/3 strong innings in which he allowed only 2 hits and struck out 11 in the second game of a doubleheader against the Colorado Rockies; the Twins won, 2-0. On May 24th, he won again, this time defeating the Baltimore Orioles at Camden Yards, 4-3, to complete a three-game sweep that confirmed the Twins' surprising first-place standing in the AL Central. He had a very solid year, going 14-8, 3.89 in 26 games as the Twins' number 2 starter behind veteran Ervin Santana. Minnesota was not able to remain in first place in the division for long, as the Cleveland Indians began to roll and put together a record-breaking winning streak starting in late August, but they did make it to the postseason as the second wild card team. Santana was tabbed to start the Wild Card Game on October 3rd, but he was unable to maintain an early 3-0 lead, and manager Paul Molitor removed him after two innings and the score tied at 4, rolling the dice with Berrios. José was not able to contain the powerful "Baby Bombers", giving up the go-ahead run in the bottom of the 3rd, and a long two-run homer to Aaron Judge in the 4th that put the game away. He ended up charged with the 8-4 loss.

Berrios got off to a great start in 2018. On April 1st, he tossed a complete game three-hit shutout to defeat the Baltimore Orioles, 7-0. The only hit the O's managed through the first eight innings was when left fielder Eddie Rosario misplayed a line drive by Chance Sisco into a double; Sisco then laid down a bunt single in the 9th and the O's loaded the bases before Berrios got out of the jam without the help of a reliever. On April 12th, he had another great start as he held the Chicago White Sox scoreless on 3 hits over 7 innings while striking out 11 to record a 4-0 win. In between, he lost a game to the Seattle Mariners on April 7th, although, in the coldest game ever played in Minnesota, he opened the day with three perfect innings before giving up 5 runs over the next two frames. He ended the season on a good note as he gave up just a run in 7 innings while striking out 9 in a 2-1 win over the White Sox on September 28th. The strikeouts gave him 202 for the year, a personal best and made him the first Twins pitcher since Francisco Liriano in 2010 to have a 200-strikeout season. He had some ups and downs in between those bookends and finished with a record of 12-11, 3.84, although he did make the All-Star team for the first time.

Berrios took the ball on Opening Day in 2019, permitting no runs in 7 2/3 innings on the strength of 10 strikeouts in a 2-0 victory over the Cleveland Indians. He made a return trip to the All-Star Game and finished the season 14-8 with a 3.68 ERA, 1.22 WHIP and a 51/195 BB/K ratio in 200 1/3 innings. The surprising Twins surged to a division title, with Berrios allowing 3 runs (just one earned) in 4 innings of work of Game 1 of the ALDS against the New York Yankees. The Twins' bullpen would come apart in the 10-4 loss, and the Twinkies would be swept in three games. In 2020, he made just 12 starts in a season shorted to 60 games by the Coronavirus pandemic and finished at 5-4, 4.00, with 68 strikeouts in 63 innings as the Twins made the playoffs for the third time in three years. The results were no better than the two previous occasions, however, as they were swept in two games by the Houston Astros in the Wild Card Series. It was not José's fault, however, as his start in Game 2 on September 30th was excellent, with 1 run allowed in 5 innings, but the batters failed to give him more than one run, and the Astros scored twice more in the late innings to end the series.

The Twins were favorite to repeat in the AL Central in 2021, or at least to give the White Sox and the Indians a run for their money, but it wasn't to be. They got off to a slow start and never recovered, in spite of still having the core of the good team that had won 100 games only two years prior. For his part, Berríos pitched well when he got the ball with a record of 7-5, 3.48 over the first four months. But changes needed to be made, and with all sorts of would-be contenders looking for pitching, he made an attractive target. On August 30th, the Toronto Blue Jays paid a steep price to acquire his services, giving two very highly rated prospects in IF-OF Austin Martin, fresh off an appearance in the 2021 Futures Game, and P Simeon Woods-Richardson, at the time a member of the United States Olympic Team competing at the Tokyo 2020 Games. The fact that he was under contract for another year and not simply a two-month rental prompted the Jays to open their vault of prize prospects to acquire him. The Jays chartered a private plane to bring him to Toronto in time to make his first start on August 1st, stopping along the way to pick up another trade deadline acquisition, Joakim Soria. He did not disappoint, as he gave the Jays 6 scoreless innings in a 5-1 win over the Kansas City Royals. In all, he posted a 3.58 ERA in 12 starts with Toronto, with 78 strikeouts in 70 1/3 innings, providing the team with very solid work as they fought for a postseason slot until the last day of the season. Overall, he ended the year at 12-9, 3.52 in 32 starts. He finished second in the AL with 192 innings, behind only Blue Jays teammate Robbie Ray, and fifth in strikeouts with 204.

Following the 2021 season, on November 16th, he signed a seven-year contract extension with the Blue Jays worth $131 million.