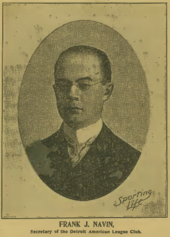 Frank Navin owned the Detroit Tigers from 1908 until his death in 1935. During most of the time he owned the team, Tiger Stadium was known as Navin Field. He died of a heart attack while horseback riding.

Frank Navin was born in an Irish immigrant family in Adrian, MI. He worked on the railroad as a youngster, then entered law school at what is now Michigan State University (it was called the Detroit College of Law in those days). He tried unsuccessfully to be elected as a justice of the peace, and when that failed began to work in the insurance business. He worked for Detroit, MI insurance broker Samuel Angus who purchased the Detroit Tigers franchise in 1902. He was named the team's business manager, handling the day-to-day affairs of the team.

Angus sold the team to William Yawkey Sr. in 1903, who kept Navin as his business manager. Yawkey died suddenly and left the franchise to his son William Yawkey Jr. The son had little interest in the franchise and let Navin run it with no interference. In 1908, Yawkey sold half of his controlling interest to Navin, making him officially the team President. He finally became majority owner in 1919, when Yawkey's estate sold him the small number of shares necessary to do this; the rest of the shares were owned by Walter Briggs and John Kelsey, both of whom had made their fortune in the automobile industry. In contrast, Navin was a baseball man through and through, who had no source of revenue outside the team and was personally involved in all matters related to the franchise, both on and off the field. He quickly became one of the most influential personalities in the American League, clashing repeatedly with league President Ban Johnson, but then becoming a key ally of Commissioner Kenesaw Mountain Landis when the latter was appointed to the newly-created post in 1920.

Navin was instrumental in assembling the powerhouse team that won three consecutive American League pennants from 1907 to 1909. He attracted outfielder Sam Crawford and pitcher Wild Bill Donovan from the National League with generous contract offers, and purchased the 18-year old Ty Cobb from the South Atlantic League, surrounding these superstars with solid players all around. He also made a critical decision when he chose Hughie Jennings as manager in 1907, having noticed him while he was managing the minor league Baltimore Orioles in 1906. He drafted Jennings as a player for the standard fee, in order to escape Orioles owner Ned Hanlon's exorbitant compensation demands for taking away his manager. Because he was not personally a rich man, Navin kept a tight lid on payroll, which started to cause problem when his players became very successful and resented not being payed on a scale equivalent to their major league counterparts. For example, Cobb held out in 1911 in protest against Navin going back on a promise to increase his annual salary to $ 10,000 (Cobb had his way in the end). However, he also backed his players when necessary, such as the famous instance in 1912 when the entire team went on strike to protest Cobb's suspension. Navin was ready to pay a fine for failing to field a team, then provided a team of amateurs to play the Philadelphia Athletics on May 18. The resulting 24-2 loss was such an embarrassment that it forced Ban Johnson to reduce Cobb's suspension in order not to have the season turn into a farce.

The franchise became highly profitable in the 1910s following the three consecutive World Series appearances, and Frank Navin used the earnings to build a state-of-the-art ballpark in 1911, which would eventually become known as Tiger Stadium. It was to serve as the team's home for 88 seasons and was long considered one of the best facilities in all of baseball, for players, fans and reporters alike. However, the Tigers had less success on the field in the ensuing years, failing to win another pennant during the 1910s and 1920s. Cobb replaced Jennings as manager after a seventh place finish in 1920, but the team failed to contend, and Cobb and Navin began a feud over Cobb's allegation that the owner was too tight-fisted to provide him with sufficient talented players. In 1926, Cobb was forced to resign over a gambling scandal and was replaced by George Moriarty, another former Tiger player.

Navin's fortune was badly reduced by the 1929 stock market crash, and he had to rely on Briggs's money to keep the team afloat. He financed the purchase of stars such as Mickey Cochrane and Goose Goslin who brought the Tigers their first World Series championship in 1935. Navin, who had been overjoyed by this crowning achievement, died only a month later.