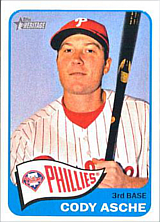 Cody Asche reached the big leagues in 2013 with the Philadelphia Phillies. He played parts of five big league seasons.

Cody made his MLB debut with a 7-3 lead over the Giants, pinch-hitting for John Lannan with two outs and one on in the 7th. Facing Jean Machi, he popped up. In an abbreviated campaign he batted .235 with 5 home runs and 22 runs batted in. He earned the Opening Day nod at the hot corner in 2014, becoming the first homegrown Phillie to do so since Scott Rolen. With super prospect Maikel Franco breathing down his neck, he batted .252/.309/.390 with 10 home runs and 43 runs scored. Despite a hot start to the 2015 season, Franco's accelerated progress led to Cody's demotion to Triple A Lehigh Valley to begin a transition to playing the outfield. He managed an okay .245/.294/.395 in 129 big league games, then saw his playing time dry up after struggling to a .213/.284/.350 line in 71 games in 2016. With Franco established at the hot corner and more promising outfield options, Asche was designated for assignment and released in December. Cody caught on briefly on the south side of Chicago, appearing in 19 games in 2017, and has kicked around in the minor league systems of both New York squads and the Boston Red Sox since.