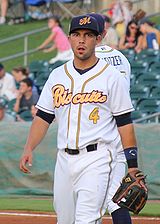 Riccio Torrez has played in the minors, as has brother Raoul Torrez.

Torrez was 1 for 6 with two walks, a hit-by-pitch and five runs as a bench player for the US in the 2005 World Youth Championship. In the 2007 Pan American Junior Championship, he starred for the US, hitting .429/.579/.714 with 7 runs and 6 RBI in six games; only Kyle Skipworth had a better OPS on a team which also included L.J. Hoes, Robbie Grossman and Eric Hosmer. His three doubles tied Matt Holliday's Team USA record for a Junior Pan American Games. He was All-State as a high school junior that year. As a senior, he set a school record with 16 home runs. The Arizona Diamondbacks took him in the 32nd round of the 2008 amateur draft but he continued on to college.