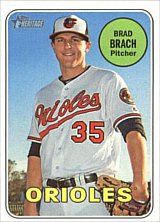 Pitcher Brad Brach reached the majors in 2011. He was an American League All-Star in 2016.

Brach played college ball at Monmouth, where he won 29 games and struck out 277 hitters, both school records. He was selected by the Padres in the 42nd round of the 2008 amateur draft and signed by scout Jim Bretz. He made his pro debut that summer with the AZL Padres, going 1-1 with a 2.01 ERA and 33 strikeouts in 18 appearances out of the pen. He spent the next year with the Fort Wayne TinCaps, going 3-3 with a 1.27 ERA while leading the Midwest League with 33 saves. With the Lake Elsinore Storm, he posted a 2.47 ERA and led the California League with league-record 41 saves. Brach began 2011 with the San Antonio Missions and recorded 23 saves for them, best in the Texas League. In early July, he was promoted to the AAA Tucson Padres, for whom he saved 11 games.

Called up to the big league Padres in late August, Brach made his major league debut on August 31st, pitching 1 1/3 innings in relief against the Los Angeles Dodgers; he gave up 2 hits but no runs and struck out 3 batters. Overall, in 9 games for San Diego, he went 0-2 with a 5.14 ERA. Brach made the Padres Opening Day roster in 2012 and spent most of the season in the majors, appearing in 67 games. He earned his first big league win on August 10th against the Pittsburgh Pirates, and overall posted a 2-4 record, a 3.78 ERA and 75 strikeouts. He split the next summer between the majors and AAA Tucson, making 33 appearances for each club.

The Atlanta Braves acquired Brach for their stretch run at the trading deadline in 2018. In 27 appearances, he logged a skinny 1.52 ERA. In 2 NLDS appearances, he allowed a run in 1 1/3 innings. Waiting all the way to February during a glacial free agency, he signed a one year, $3 million pact with the Chicago Cubs for 2019. In 42 games, he was lit up, to the tune of a 6.13 ERA and 28 walks in 39 2/3 innings. He was released in August and signed by the New York Mets, with a better 3.68 ERA in 14 1/3 innings in August and September. Following the season, he signed a one year deal with a player option to stay in Flushing.

Brach is the brother of Brett Brach, who was a college teammate of his at Monmouth.