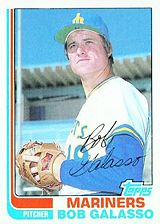 Bob Galasso was signed by the Baltimore Orioles in 1969 and made his pro debut the following summer with the Bluefield Orioles. He went 13-5 for the Rochester Red Wings in 1976 while leading the International League with a .722 winning percentage. However, the pitching-rich O's also had 20-game winners Jim Palmer and Wayne Garland on their big league roster along with Ross Grimsley, as well as youngsters Mike Flanagan, Dennis Martinez, and Scott McGregor coming up, Galasso was deemed expendable and taken by the Seattle Mariners in the 1976 expansion draft.

Galasso made his big league debut with Seattle in 1977, going 0-6 with a 9.00 ERA in 11 games while splitting the season between the majors and the AAA level.

Galasso was let go by the Mariners prior to the 1978 season and soon signed with the Milwaukee Brewers. After spending that entire year with the Spokane Indians and winning 10 games, he was back in the majors with Milwaukee in 1979, posting a 3-1 record and notching 3 saves in 31 outings for the team. He spent the 1980 campaign back in the minors before being let go by the Brewers the next spring.