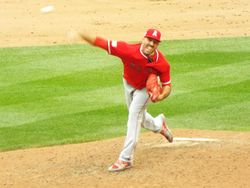 Blake Parker is a relief pitcher who made his debut with the Chicago Cubs in 2012.

In his big league debut, the Arkansas alumnus entered in the top of the 7th with a 5-1 deficit against the Philadelphia Phillies on May 17, 2012. He struck out Ty Wigginton then allowed a Hector Luna single before Freddy Galvis hit into a twin killing. Things were worse in the 8th. Opposing hurler Roy Halladay began with a single, then Jimmy Rollins walked. After a passed ball, Parker retired Juan Pierre and struck out Shane Victorino. Hunter Pence grounded back to Parker, who made a two-run throwing error. Michael Bowden promptly replaced the rookie on the hill. He put up an ERA of 6.00 in 7 appearances that season. He had a solid rookie season in 2013, however, as his ERA was a solid 2.72 in 49 games covering 46 1/3 innings. He also recorded his first major league save that season while going 1-2. However, he fell back in 2014, with an ERA of 5.14 in 18 games. He spent the 2015 season in the minors, then signed as a free agent with the Seattle Mariners before the 2016 season.

He played just one game with Seattle then was claimed off waivers by the New York Yankees in early August and was given a longer look, going 1-0, 4.96 in 16 games. At the end of the season, the Los Angeles Angels, the Milwaukee Brewers and the Angels claimed him off waivers in turn. He ended up with the Angels and put up a couple of successful seasons for them in 2017 and 2018. The first year, he was 3-3, 2.54 in 71 games and picked up 8 saves, and the second he increased that total to 14 saves, with a record of 2-1, 3.26 in 67 games. His save total easily led the club. He became a free agent after the 2018 season and signed with the Minnesota Twins for 2019. He started the year as the team's closer and had a very good first month with 6 saves and an ERA of 0.96 in March and April. Things also went well in May, but his ERA jumped to 7.59 in June as Taylor Rogers displaced him in the role of closer. When the team's entire bullpen imploded in July, just as the Cleveland Indians were closing in on Minnesota, eating away at the large lead they had built in the early going, he was one of the relievers dumped in a search for better performance. On July 23rd, he gave up 4 runs while retiring just one batter in a 14-12 loss to the New York Yankees and was designated for assignment after the game, as it was not possible to send him down to the minors. On July 30th, the Philadelphia Phillies signed him as a free agent.