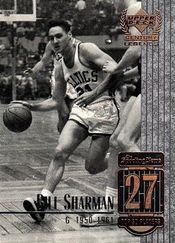 In 1951, Sharman spent the season with the AA Fort Worth Cats, hitting .286/~.351/.377, scoring 84 runs and stealing 23 bases while splitting his time between center field and left field. Late in the year he was promoted to the Brooklyn Dodgers but never played in a game. There is a myth that he became the only player to be ejected from a Major League Baseball game without playing in one when umpire Frank Dascoli cleared the Dodgers bench for arguing with a call at home plate on September 27. None of those players were ejected, as evidenced by the fact that Wayne Terwilliger entered the game the next inning.

"I was dying to get into a game," Sharman recalled in 1971. "In the outfield, as pinch-hitter, anything. And five times, I almost did. Charlie Dressen called on me to pinch hit five times. But strange things kept happening. Before I could get up to the plate, somebody'd hit into a double play and end the inning, or somebody'd get picked off a base."

Sharman watched from the bench as Bobby Thomson hit "The Shot Heard 'Round the World" to give the New York Giants the 1951 pennant. In 1988, he remembered "watching Eddie Stanky tackling ecstatic Giant Leo Durocher and the two rolling around the ground in idiotic joy. Bill kicked dirt on them as he trudged sadly past."

Sharman then chose to devote his energies to basketball. He did not play baseball professionally in '54. However, he came back for the 1955 season, which he spent with St. Paul as well. That May, he told The Sporting News, "If I honestly didn't think I could make it in the big leagues, I would not be playing in St. Paul this season. . .And if I make it in the majors I'll give up pro basketball."

He hit .292/?/.406 that year with 11 homers. He played 50 games at third base, a new position for him. It was his last season as a baseball pro; Sharman would devote the rest of his athletic career to basketball, becoming a member of four NBA champion teams with the Boston Celtics. Overall, he had hit .281/?/.411 in 638 games in professional baseball.