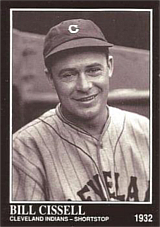 “It would have suited me better... if the White Sox had bought me for fifteen cents… I was like a substitute actor who hadn’t fully rehearsed his part, but who was suddenly shoved before the footlights and booked for the star role. If I could have begun at the bottom and worked up slowly, I might have gone somewhere. But I was expected to begin at the top. A rookie is under something of a handicap when he breaks into the majors as a comparative unknown. But the handicap is far greater when everybody knows about him and thinks he is much better than he really is.” - Bill Cissell, to Baseball Magazine

"The ballyhoo I got when Portland sold me for that sum was the greatest burden any player ever carried to the majors." - Bill Cissell

Bill Cissell, a player of whom great things were expected, had a nine-year career in the majors. Although he never developed into a superstar, he did place in two separate MVP votes.

Cissell was purchased by the Chicago White Sox from the Portland Beavers in 1927 for $123,000, one of the largest purchases in baseball history at the time. Two years earlier, his discharge from the US Army had been purchased by Des Moines of the Western League for $75. A shortstop by trade, Bill began his career hitting 6-for-11 with 3 doubles and 3 runs scored. In this initial small sample size, it looked like Mr. Comiskey's purchase was a wise move. Unfortunately, the pressure on Cissell was too great and he began to flounder. He maintained a .300 average into May before falling off, finishing the year at .259 with 66 runs scored in 125 games. Things perked up a little in 1929, .280 with 83 runs scored in 154 games. In 1930, he moved over to second base to make way for a youngster named Luke Appling, who would hold down shortstop more or less for the next 20 years. After falling to .220 in 1931, he was moved to the Cleveland Indians early in the 1932 season.

Without the pressure he faced in Chicago, Cissell thrived and hit .320 during the remainder of the year with the Indians, establishing career highs in runs scored (85), hits (184) and doubles (36) along the way. The following season, the lightning in a bottle was gone, as he batted just .230 in 112 games. He spent the 1934 season with the Boston Red Sox before catching on with the Baltimore Orioles of the International League. In 1935, he was back in old haunts with the Portland Beavers, the last of three managers for the team that season. The team finished with an overall record of 87-86 and in 4th place in the Pacific Coast League. Cissell was drafted in the 1936 Rule V Draft by the Philadelphia Athletics before the 1937 season, hitting .265 for the A's in 34 games. He spent 1938 with Baltimore before his contract was purchased by the New York Giants in August, finishing his major league career with 38 games and a .267 average. Following the season, he was sold to the Hollywood Stars, kicking around the PCL until 1941.

After his playing career, Bill worked for the Chicago White Sox as a maintenance man. He died destitute at the age of 45 after being found in a small apartment in Chicago in 1949.