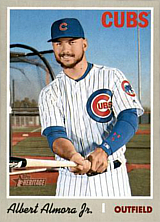 Albert Almora is also called Albert Almora Jr. He was a top 10 pick in the 2012 amateur draft and is a cousin of Manny Machado.

He reached the majors with the Cubs in June of 2016, the year in which the Cubbies broke their 108-year World Series title drought. He hit .277 in 47 games as a back-up outfielder in his rookie season and saw action in all three rounds of the postseason. In the 2016 World Series, in which the Cubs defeated the Cleveland Indians in seven games, he went 0 for 1 but scored an extremely important run in Game 7 on November 2nd. Kyle Schwarber led off the top of the 10th with a single and Albert pinch-ran for him, then took second on a fly out by Kris Bryant and scored the go-ahead run on a double by Ben Zobrist. The Cubs later added an insurance run, which proved to be crucial as they hung on for an 8-7 win that broke the infamous Curse of the Billy Goat.

In 2017, Almora was in competition for a starting job and ended up making 65 starts in center field, the most on the team (Ian Happ and Jon Jay made 41 and 43, respectively). He hit .298 with 18 doubles and 8 homers in 132 games, scoring 39 runs and driving in 46, putting up an OPS+ of 100. He then went 2 for 6 as the Cubs defeated the Washington Nationals in the Division Series, and 3 for 16 with a double and a homer in their loss to the Los Angeles Dodgers in the NLCS. He looked like a fixture in the Cubs' outfield for the next decade at that point, but his production fell in 2018, as he hit .286 in 152 games. He did set personal bests for runs (62), hits (127) and doubles (24) but hit just 5 homers and drew just 24 walks as his OPS fell to 86. The Cubs' season ended poorly, as they were just one win away from securing the best record in the National League with one game to play, but ended up losing both a one-game playoff against the Milwuakke Brewers for the division title, and the Wild Card Game in extra innings to the Colorado Rockies, both at home, to make a deflating early exit from the postseason. Albert was 2 for 5 with a pair of strikeouts in the loss to Colorado.

On May 29, 2019, he was involved in an incident that could have been tragic when he hit a foul ball on a line drive into the third base side stands at Minute Maid Park in Houston, TX. The ball hit a four-year-old girl on the head and she had to be immediately taken to a hospital. Almora broke down in tears at the plate, and while he was able to complete the at-bat after a delay, he was obviously badly shaken. He went to the section of the stands on his way back to his position and talked with a security guard who had witnessed the accident from up close, and once again broke down and had to be comforted. He explained that as the father of two young boys the same age as the unfortunate victim, he was particularly affected. The accident sparked a debate on extending protective netting - which was at the time limited to the end of both dugouts - much further down the foul lines in order to offer fans better protection, so at least some good resulted from it. His production continued to fall that year, as he hit just .236 in 130 games, with a dreadful OBP of .271 and an OPS+ of 67. The Cubs missed the postseason and in 2020, he lost his starting job as he played just 28 game in the abbreviated 60-game season, hitting a meager .167 with just one extra-base hit, a double. He did not see any action in the Cubs' loss to the underdog Miami Marlins in the Wild Card Series and on December 2nd, he was non-tendered alongside Schwarber, who had also hit below the Mendoza Line during the season, making both free agents.

On February 7, 2021, it was reported that he had reached a deal with the New York Mets for the upcoming season.