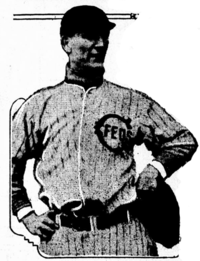 William Fischer, who played five years in the big leagues, came into his own in the Federal League in 1915, when he was second in the league in batting average. He also did well in the National League in 1917, when his on-base percentage was tenth in the league.

He broke into the majors with the Brooklyn Superbas in 1913, where he was the same age as Casey Stengel. It was the last year that Bill Dahlen managed the team before Wilbert Robinson took over in 1914.

Fischer was managed in 1915 by Joe Tinker. In 1916 and 1917 he was a teammate of the elderly Honus Wagner. In August of 1917, he hit an inside-the-park home run, an unusual feat for a player who mostly played catcher.

He was the first player in Chicago Cubs history to collect four hits in a game at Wrigley Field. He did this on April 20, 1916 against the Cincinnati Reds.