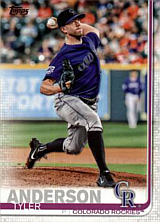 Tyler Anderson was a first-round pick in the 2011 amateur draft.

Anderson was taken in the 50th round of the 2008 amateur draft out of high school by the Minnesota Twins. He was one of three high schoolers Minnesota took that year but failed to sign and who would be first-rounders three years later. The others were Kolten Wong and George Springer. As a college freshman, the big left-hander left a lot to be desired at 2-9, 6.26. He improved to 7-5, 2.98 as a sophomore and was 5th in the Pacific-10 Conference in ERA. He set a school record with 105 strikeouts, 6th-most in the Pac-10. He was the first All-Conference pitcher from Oregon in 39 years, joining Trevor Bauer, Gerrit Cole and Seth Blair as 2010 All-Pac-10 pitchers who wound up being first round picks. In the 2010 World University Championship, Anderson struck out six and allowed two hits in five shutout innings in his lone appearance, teaming with Kyle Winkler in a shutout of China. The US got the Silver Medal and Anderson joined Matt Barnes as US hurlers with a perfect ERA in the Championship.

His junior year, Anderson set Oregon records for strikeouts in a career (285), season (114) and game (14). For the year, he was 8-3 with a 2.17 ERA and .201 opponent average. The Colorado Rockies chose Tyler with the 20th pick of the 2011 amateur draft, right after fellow 2010 Team USA mound mates Sonny Gray and Barnes. Anderson was signed by scout Jesse Retzlaff for a reported $1.4 million at the signing deadline on August 15th. He reported to the Tri-City Dust Devils in the Northwest League, but did not pitch for them as the Rockies wanted him to get his first professional experience in the Arizona Fall League. He started 2012 with the Asheville Tourists, going 5-0 in his first 7 starts.

Anderson made his major league debut with the Rockies on June 12, 2016, starting against the San Diego Padres. It was a strong performance as he pitched into the 7th inning, giving up 1 run on 6 hits, no walks and 6 strikeouts although he ended up with a no-decision. He earned his first win on July 9th, when he defeated the Philadelphia Phillies, 8-3. In that game, he also got his first career hit, a single, and hit his first homer. Both hits came off Jerad Eickhoff. Anderson pitched off and on in Denver the next four years, peaking with 32 starts and a 7-9, 4.55 mark in 176 innings in 2018. The next year, he made just five horrifying starts (11.76 ERA, 20 2/3 innings) before undergoing knee surgery. He was claimed on waivers by the San Francisco Giants after the season and signed a new one year deal in December for 2020.