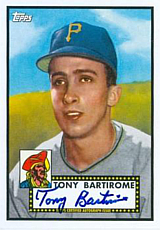 "Tony Bartirome was an absolute delight. . . one of the most positive guys I've ever seen." - Charlie Metro, about his Denver team

Tony Bartirome was one of those players, like Sparky Anderson, who was a regular infielder in his only season in the majors. Tony signed with the Pittsburgh Pirates on February 8, 1951, by Pie Traynor. Bartirome played 124 games for the Pirates in 1952, a team which lost 112 games.

In 1950, Tony was selected to represent Pittsburgh in the annual Hearst Sandlot Classic at the Polo Grounds in New York, NY. Bartirome, while listed as 20 years old because he was born in May, was actually only 19 when he made the Opening Day roster and appeared in his first game in April 1952. He was a year younger than 21-year-old shortstop Dick Groat. After the season, Tony was drafted into the Army and served two years, returning to the Pirates minor leagues in 1955, but never to the majors. In the minors, he played for the Denver Bears, among other stops. In the winter of 1958, he played in the Panama League and in the 1958 Caribbean Series.

After his playing career ended, Tony was the athletic trainer for the Columbus Jets from 1964 to 1966, and then was the head trainer for the Pirates from 1967 through 1985. After Chuck Tanner was fired by the Pirates after the 1985 season, Bartirome accompanied him to the Atlanta Braves where he was a coach from 1986 to 1988. He briefly served as traveling secretary for the Bradenton Explorers in the short-lived Senior Professional Baseball Association. After the league folded, Bartirome retired. He lived in Bradenton, FL, beginning in the early 1980s and died there in 2018 at the age of 86.