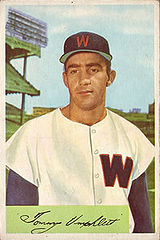 Tommy Umphlett played major league ball from 1953 to 1955 with the Boston Red Sox and Washington Senators. Pretty much a career minor leaguer (15 years), for the last 12 years of his professional career (the last four in AA), he struggled unsuccessfully to make it back to the majors before retiring in 1967.

At 6' 2", 180 pounds, Umphlett - a righthander - was originally signed by the Red Sox in 1950. That year with the Marion Red Sox, he hit .319 in 94 games. He made his big league debut on April 16, 1953 at the age of 21 and wearing the number 38. He hit .283 in his rookie season as the team's regular centerfielder, displaying a great eye at the plate, averaging one strikeout every 16.5 at-bats. He was #2 in Rookie of the Year voting his first season, but was soon dispatched to the lowly Senators, on December 9th, with Mickey McDermott in return for Jackie Jensen.

A classic example of the so-called "Sophomore Jinx", his career rapidly declined after his promising rookie season. Hitting only .219 and .217 in his next two seasons, he would end up hitting only .246 with 6 home runs in 360 career games (1,160 at-bats) in his brief major league career. He averaged one strikeout every 10.8 at-bats in his career. Never much of a threat on the basepaths, he stole seven career bases. He had a .986 career fielding percentage.

He played his final Major League game on September 24, 1955. In 1954, he wore number 4. In 1955, he wore 22. On November 8, 1955, he was traded by the Senators with Bob Porterfield, Johnny Schmitz, and Mickey Vernon back to the Red Sox for Karl Olson, Dick Brodowski, Tex Clevenger, Neil Chrisley and Al Curtis (a minor leaguer). On June 12, 1962, he was traded by the Red Sox with cash to the New York Yankees for Billy Gardner.

According to Baseball-Reference, the player he is most similar to statistically is Art Kruger. He spent all three of his seasons with Mickey McDermott - longer than any other teammate, something which was made possible by the fact they were traded together.