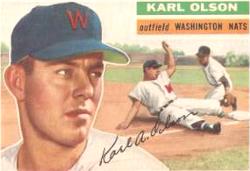 The son of Swedish immigrants, Olson signed with the Boston Red Sox in 1948 after graduating from high school. He reached the majors with the club briefly in 1951 before serving in Japan during the Korean War. Following his military service, he returned to the Red Sox in 1953. He was traded to the Washington Senators following the 1955 campaign, and was the Opening Day centerfielder for the Senators in 1956. In that season's first game, he clubbed a pair of home runs, and he had a .404 average at the end of April. He ended the year hitting .246 with 4 homers. Dealt to the Detroit Tigers the next year, his playing career ended after the 1957 season.