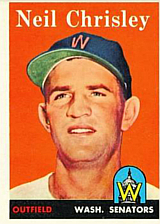 Neil Chrisley made his big league debut on April 15, 1957 for the Washington Senators against the Baltimore Orioles as a pinch-hitter for Camilo Pascual in the 11th inning. He singled off pitcher Billy Loes, but Pedro Ramos pinch ran for him. He collected his first home run off Bob Turley on May 9, 1958.

A stellar minor-league hitter (.295), he struggled mightily in the bigs, hitting only .210 in parts of five seasons. He was mostly a utility outfielder and pinch-hitter and had his best season with the Detroit Tigers in 1960. On May 7th that year, he hit a 1st-inning double off Bill Monbouquette of the Boston Red Sox; it was the only hit given up by Monbouquette as he beat the Tigers, 5-0, on a one-hitter. He had a two-homer game a week later, hitting both off Johnny Kucks of the Kansas City Athletics on May 14th. Defensively, he only appeared in three games other than an outfielder - in 1958, he was used in one game as a third baseman and in 1960 he was used in two games as a second baseman. He ended his big league career with a few games for the Milwaukee Braves in 1961. Chrisley hit 60 home runs in his final three minor league seasons, as well as hitting .343 with the Indianapolis Indians in 1957. According to similarity scores, the most similar player to Neil was Joe Borchard.

According to his obituary, Chrisley attended Newberry College on a basketball scholarship. At one point after his retirement from baseball, he worked as an insurance agent in Greenwood, SC. [1]. He lived in Greenwood for a number of years until passing away in 2013.