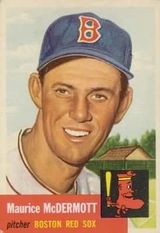 Pitcher Mickey McDermott went 16-6 with a 3.29 ERA for the Scranton Red Sox in 1946 and threw two no-hitters during the course of the season (including one in the playoffs). He reached the majors in 1948 with the Boston Red Sox, appearing in seven games out of the bullpen. The next year, on May 24th, while with the Louisville Colonels, he struck out 20 batters in a game against the St. Paul Saints.

Definitely one of the better-hitting pitchers of his era, McDermott had a major league batting average of .252 with an OBP of over .300, explaining why he used frequently as a pinch-hitter, getting 127 at-bats in that role.

After his playing career ended, McDermott was a California Angels coach in 1968. In 1991, he and his wife won $7 million in the Arizona Lottery. He died of cancer at age 74.