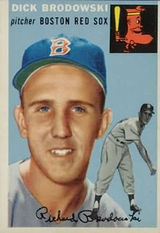 Right-hander Dick Brodowski made a quick jump to the major leagues after a 21-5 season for the Marion Red Sox of the Ohio-Indiana League in 1951, his first year out of high school. Brodowski also led the league in strikeouts with 212 and chalked up a 2.60 ERA. Needless to say, he was the starting pitcher in the circuit's All-Star game. After a 7-1 start for the Louisville Colonels in 1952, he was promoted to the Boston Red Sox and went 5-5, but never again lived up to his early promise after two years (1953-1954) spent in the United States military.

He was traded to the Washington Senators in 1955 and had just short stays with the Senators over the next two years before being traded to the Cleveland Indians. After some effective relief pitching with the Pacific Coast League San Diego Padres, Dick was given another look by the 1958 and 1959 Indians. He was at his best in his last season in 1959, going 2-2 plus 5 saves with an ERA of 1.80 in 18 appearances in relief. Overall, he was 9-11 in 72 games.

Brodowski worked in the insurance business, liquor sales and with Shone and Webster Security after his days in baseball. He died in 2019.

Baseball Players of the 1950s
The Encyclopedia of Minor League Baseball: Third Edition