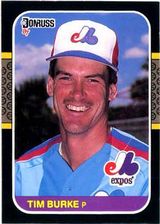 Tim Burke was an All-Big Eight baseball player three years in a row at the University of Nebraska. Originally property of the Pittsburgh Pirates, the Bucs dealt him to the New York Yankees as part of a package to snare former New York Mets All-Star outfielder Lee Mazzilli in December 1982. Almost one year to the day later, the Yanks peddled Tim to the Montreal Expos for minor league journeyman Pat Rooney. The Bucs and Yankees loss would soon be the Expos gain.

Tim, whose finest pitch was his sinker, had an unusual pitching motion. He started his windup with the ball in his glove. He would then pick it up with his pitching hand when his arms joined together about waist high, and would proceed to throw, all without pausing. The windup served him well; in an eight year career, he finished 49-33 with a 2.72 ERA and 102 saves in 498 games. He is still the franchise leader for the Expos/Washington Nationals with 425 games pitched.

After his playing career, he wrote a book with his wife, Christine, and author Gregg Lewis: Major League Dad: The Moving Story of an All-Star Pitcher Who Gave up Baseball for His Family (1994). In 1995, he appeared in the Geoff Moore & The Distance music video for their single, "Home Run".