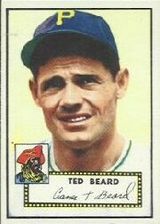 Ted Beard began his pro career in 1942. From 1943 to 1945, he served as a medic in the Army, being stationed in the Pacific during World War II. In 1946, Beard hit .328 for York of the Inter-State League. Two years later, in 1948, he was in AAA and starring for the Indianapolis Indians of the American Association. He led the league in triples, runs scored, walks and outfield assists (32) while batting .301. His fine performance led the Indians to a 100-54 record, the best in the AA. He drew walks and hit 3 triples in a brief trial with the Pittsburgh Pirates while showing off a great glove in center, but hit just .198.

He spent the next few years bouncing between Pittsburgh and the high minors. In 1950, he had his biggest season in the majors - .232/.333/.356 in 61 games. He began the year on a great note, being among the top 5 in runs scored and briefly sparking the Bucs into first place in early May before breaking his wrist while sliding, which started a downhill trend for the team. In a two-game stretch in late June, Beard scored 7 runs; he would score 32, all told, in only 177 at bats that season. On July 16, the 5'8", 165 lb. outfielder smacked a home run over Forbes Field's 86-foot high right field grandstand roof, just the second time in the grandstand's 25-year existence this feat had been accomplished, its sole predecessor being Babe Ruth's final major league home run on May 25, 1935. Subsequent additions to this 10-member fraternity include Hall of Famers Mickey Mantle, Eddie Mathews, Willie McCovey and Willie Stargell.

Having lost significant development time to the war, Beard was already 30 years old entering his 4th major league season in 1951 and was now a prospect turned suspect. He had another strong year with Indianapolis, finishing third in the AA in walks (101) and steals (17) despite only playing 117 games due to his time in the majors. He posted an OBP around .420. In 1952, he began a long career in the Pacific Coast League when Pittsburgh traded him to the Hollywood Stars for future considerations. The veteran Beard played a key role in helping Hollywood to a 109-71 season, again helping a 100-win team out. He walked 75 times and stole 24 bases in 127 games. Beard once again played on a minor league pennant winner in 1953 for the Stars. He hit 17 homers, second on the team to league leader Dale Long. His 21 steals ranked second in the circuit and his 13 triples tied for second. On April 4th, Beard homered four times in a game against the San Diego Padres, driving in all the Stars' runs in a 6-5 victory. Beard produced 12 hits in 12 consecutive at bats over the course of four games.

In 1954, Beard went to the San Francisco Seals and continued to wreak havoc on the PCL, hitting .300 with 99 walks, 104 runs scored, 35 doubles, 30 steals and his typical OBP over .400 at age 33. The latter 5 categories all placed him third in the league. 1955 finished Beard's run in the PCL and was definitely an off season as he hit just .245/.368/.351. He still scored 91 runs and drew 98 walks and was second in the PCL in walks and among the top 10 in OBP, steals, runs and triples - not bad for an "off season". In 1956, he returned to the place of his first huge season: Indianapolis. 1957 saw him bounce back at age 36. He hit .347 and scored 91 runs in 96 games. Despite his limited time in the league, he still finished second in the league in triples. He had a .457 OBP and slugged .559; his OBP would have led the league and his slugging would have been second had he been among the qualifiers. After four years out of the majors, Beard returned for 38 games with the Chicago White Sox in 1958, posting a .354 OBP but slugging just .218. Beard stayed with Indianapolis through 1963, retiring at age 42. He was a player-manager for part of the 1960 season. Despite significant time in the war and in the PCL, he had still played 13 years for the same AAA club. Following his playing days, Beard spent 1972 as a coach for the Appleton Foxes.