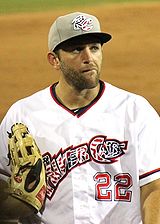 Shane Peterson made his major league debut in 2013.

Peterson was a second round draft choice by the St. Louis Cardinals out of Cal State-Long Beach in the 2008 amateur draft and was originally signed by scout Dan Kantrovitz. He was the 59th overall pick and the third for St. Louis after Brett Wallace and Lance Lynn. He signed for a $683,000 bonus. Making his pro debut with the Batavia Muckdogs, he hit .291/.400/.409 with 20 doubles, 39 walks and 39 RBI in 65 games, then was 6 for 17 in the postseason as his team won the New York-Penn League title. He finished among the league leaders in doubles (tied for second, one behind leader Jeremy Synan), OBP (3rd, after Derek Norris and Brent Wyatt) and walks (3rd behind Norris and Jake Dugger).

He made his major league debut with the Oakland Athletics in April of 2013 by starting a couple of games at first base when Brandon Moss was placed on the paternity list. He went 1 for 7 in the two games against the Houston Astros, collecting an RBI on a bases-loaded walk and also scoring a run. He struck out against Brad Peacock in his first at-bat in The Show. The next day, he drew the walk from Bud Norris to force in the run and then singled off Xavier Cedeno before coming home on a Jed Lowrie grounder.

In 2015, Shane moved to the Milwaukee Brewers organization.