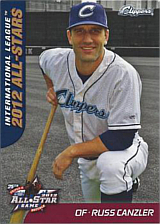 International League MVP Russ Canzler enjoyed some success in Triple A but was unable to translate into a regular big leaguer, playing just parts of two seasons. He had a decent 96 OPS+ in the majors in very limited sample size, not getting an extended look at that level.

Russ was taken out of high school in Hazleton, PA, where he also played American Legion ball, by the Chicago Cubs in the 30th round in 2004. He was signed by scout Billy Blitzer and made his debut that summer. As befits a late rounder, he made his way slowly up the Cubs' ladder. He spent his first two seasons with the AZL Cubs, playing third base the first year and first base in 2005, hitting .299 in 49 games in his second go-round. He was promoted to Boise of the Northwest League in 2006 and had a bit of a breakout season, hitting 22 doubles and 16 homers in 73 games, making the league's post-season All-Star team. In 2007, he was with Peoria of the Midwest League, hitting .270/.321/.376 in 125 games in his first taste of full season ball. He began spending some time in left field that year, in his addition to his starting job at first base. In 2008, Canzler spent the entire season with the Class A Daytona Cubs in the Florida State League. His numbers were very similar to the previous season, although he did raise his home run total from 7 to 12 in fewer at bats, improving his slugging average considerably. In 2009, he reached AA for the first time after going back to Daytona to start the season. After 28 games of his usual production - .270 with middling power - he was promoted to the Tennessee Smokies of the Southern League and hit .258 in 90 games. He was back at Tennessee in 2010, but was no longer the starter at first. His most frequent position was third base, and he also played first, the outfield, and DH. He hit .287/.372/.566 with 21 home runs in 112 games, becoming a minor league free agent at season's end.

Canzler moved to the Tampa Bay Rays organization in 2011 and started the year in Triple A. He was hitting .290 with 23 doubles and 10 homers in 84 games for the Durham Bulls and earned a spot at in the AAA All-Star Game in Salt Lake City, UT on July 13th, although he was still moving around between various positions. He was the hero of the day, hitting a 3-run homer that accounted for all the scoring in the International League's 3-0 victory over the Pacific Coast League. He ended the year with a .314 average, a league-leading 40 doubles, 18 home runs, and 83 RBI for the Bulls and was named the IL MVP, earning a September call up with Tampa Bay. He made his big league debut against the Boston Red Sox on September 15th. Entering as a pinch hitter for DH Johnny Damon, he was walked by Michael Bowden in the ninth inning in his only plate appearance. In three at bats, he recorded his first big league hit, a pinch hit single once again batting for Damon. The Rays sold him to Cleveland before spring training in 2012, and Russ got into 26 games, his last look. He batted .269 with 3 home runs in 93 at bats, with once again solid production in Triple A (.265, 22 home runs, 79 RBI with the Columbus Clippers). He hung around three more seasons, exclusively in Triple A, with the majority of his action coming with the Lehigh Valley IronPigs in the Phillies chain.