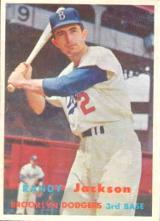 Ransom "Randy" Jackson played ten seasons in the big leagues. Most of his professional career was spent with the Chicago Cubs organization and he was an All-Star in 1954 and 1955 while with the Cubs, but he made the 1956 World Series with the Brooklyn Dodgers.

In 1954, when black players Gene Baker and Ernie Banks broke the color line to become the double-play combo for the Cubs, Jackson was the third baseman. Jackson said that he had never played with blacks before, but that both Gene and Ernie were great guys.

While with the Dodgers he mostly roomed with Roger Craig and sometimes with Don Drysdale. He was the team's most-used third baseman in 1956, when they won the pennant, hitting .274 with 8 homers 53 RBIs in 101 games, but in the World Series, Jackie Robinson was the starter at third. Randy was limited to three pinch-hitting appearances, going 0 for 3 with a pair of strikeouts. A serious knee injury in 1957 hurt his career.

There has been only one game in major league history that ended with three consecutive batters hitting home runs, in the bottom of the last inning: the Dodgers against the Philadelphia Phillies, on June 29, 1956. The Phillies led 5-2 in the middle of the 9th. A walk, then a strikeout, then home runs from Duke Snider, Jackson, and Gil Hodges, and the Dodgers won 6-5. The hits from Jackson and Hodges were on consecutive pitches.

Later after baseball he sold life and health insurance.