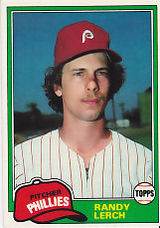 Randy Lerch was born on October 9, 1954 in Sacramento, California. He went to Cordova High School in Rancho Cordova, CA. In the June 1973 amateur draft, he was picked in the 9th round by the Philadelphia Phillies.

Lerch made a steady climb up the Phillies organization, beginning in 1973 with the Auburn Phillies, in the New York-Penn League. He led the team with 9 wins, 7 complete games and 2 shutouts. His ERA was 2.91 in 96 innings. In 1974, he played with the Rocky Mount Phillies in the Carolina League. In 21 starts, his record was 7-6 with a 3.60 ERA. It was to the Reading Phillies in 1975 in the Eastern League where he had his best season in the minors. He led the league with 16 wins (against 6 losses) and had 14 complete games in 25 starts with a 2.69 ERA. His control improved from the year before with 50 walks in 177 innings. He was called up to Philadelphia in September and made 3 relief appearances. In his first one, he pitched the 9th inning of what was a lopsided game in favor of the Phillies, leading by 11 runs. Lerch allowed 5 runs on 4 hits and a walk but finished the game. He was more effective in his next two games, pitching 3 scoreless innings each time.

Lerch pitched with the Oklahoma City 89ers in the American Association in 1976 and formed a strong lefty-righty combo at the top of the rotation with John Montague. Lerch was 13-11 with a 3.35 ERA in 29 starts. Never a strikeout pitcher, he whiffed 152 batters that year in 207 innings. He pitched one game for the Phillies in September, getting a save with a three-inning outing in a 9-1 win against the St. Louis Cardinals.

He was strongly considered for a spot in the starting rotation before the 1977 season and won the number 4 spot out of spring training. He had a strong start with 6 quality starts in his first 7 games, going 5-2 with a 3.02 ERA. His ERA was almost 6.00 the rest of the way, however, as he was hit very hard with 161 hits allowed in 118 innings, including 15 home runs. Coupled with 59 walks, that amounted to almost 2 baserunners per inning. He finished with a 10-6 record with a 5.07 ERA. He didn't appear in the postseason as the Phils were defeated by the Los Angeles Dodgers in the 1977 NLCS.

The 1978 season might have been the most satisfying of his career. He finished with a 11-8 record with a 3.96 ERA, establishing a career high in wins. He was especially good in the second half of the season, going 7-2 in his last 15 starts with an ERA of 3.19 (the team was 11-5 in games he pitched, including a one-inning relief appearance). In his last start, on the last weekend of the season, Lerch hit 2 home runs in a 10-8 Phillies win that clinched the NL East title over the Pittsburgh Pirates. In the postseason, he started Game 4 of the NLCS against the Dodgers, but was not involved in the decision in a 4-3 loss that eliminated the Phillies.

Lerch was the team's #2 starter when 1979 began. He began the season with 4 quality starts but was only 1-1. The team went through many injuries to key players that season and Lerch wasn't immune to the lack of offensive production. He went through a bad stretch after the All-Star Game but finished strong with 6 straight quality starts in September, going 3-1 with a 1.72 ERA. For the season, he made 35 starts and went 10-13 with a 3.74 ERA. The 1980 season did not start well for Lerch. He lost his first six decisions and was inconsistent. He showed spurts of brilliance, like two 10-inning starts in June and July against the Dodgers and the Montreal Expos. But the Phillies removed him from the rotation in July. He had 2 more starts in August but it was only due to a couple of doubleheaders. He was used only 8 more times in the last month and a half and only once in a meaningful situation, when the Phillies were in extra innings. The Phillies won the NL East but decided to go without Lerch in the postseason so they could add Marty Bystrom, who had gone 5-0 in September. Lerch's record for the year was an uninspiring 4-14 with an ERA of 5.16. The Phillies went on to win the World Series. As for Lerch, his days with the Phils were over.

In early March of 1981, Lerch was traded to the Milwaukee Brewers for outfielder Dick Davis. He was the Brewers' number 5 starter when the season began but was in the rotation most of the season. He went 7-9 with a 4.31 ERA in 18 starts (plus 5 relief outings). He had his most important games from September 12 to September 20th, he was 3-1 in 3 starts and a relief outing. Each of these wins was crucial as the Brewers edged the Detroit Tigers in the last weekend of the season to win the AL East second-half title. In the postseason, he started Game 3 of the ALDS at Yankee Stadium with the New York Yankees leading the series 2-0. Lerch pitched 6 solid innings in a no-decision, allowing 1 run as the Brewers won, 5-3.

Expectations were high for the Brewers in 1982. They had been one of the best offensive teams in the American League since 1978 but had not much to show for it. Manager Buck Rodgers was fired early in the season as the team started slowly and was replaced by Harvey Kuenn, for whom the team went on a hot streak. Lerch remained in the rotation and had a positive record but was inconsistent and his ERA was 4.97. He also struck out only 33 batters in 108 2/3 innings while walking 51. In August, his contract was sold to the Montreal Expos. The move did not sit well with Lerch. He won his only 2 decisions with the Expos as he was used very sparingly, making just 6 appearances (4 starts). He requested a trade after the season but rescinded his demand in spring training 1983.

Lerch was pretty much a mop-up man with the Expos in 1983. He made 5 spot starts in 19 outings. He was 1-3 with a 6.75 ERA when he was released in late July. He signed with the San Francisco Giants organization in mid-August. He was sent to the Phoenix Giants in the Pacific Coast League where he pitched 5 games in relief. He was called up in September and made 7 relief appearances until the end of the season, winning his only decision. He then played the whole 1984 season with the Giants, his last complete year in the majors. He missed a month in July due to injury and was used mostly in relief, recording 2 saves. His record was 5-3 in 37 games (72 1/3 innings) with a 4.23 ERA.

He became a free agent after the season and signed with the Phillies in May 1985. He pitched for the Portland Beavers in the PCL the rest of the season, as a starting pitcher. His ERA was 2.75, best among starters on the team. He made 17 starts with a 6-6 record, allowing only 84 hits in 108 innings. He was back with Portland to begin the 1986 season. He was 6-5 with a 3.01 ERA when he was called up by the Phillies in June. He went 1-1 in 4 games in relief but his ERA was 7.88 with a WHIP over 2.00. He was released at the end of the month. The St. Louis Cardinals signed him in July and he finished his season and his career with the Louisville Redbirds in the American Association, going 4-2 in 8 starts and a 3.89 ERA.

In 1989, Lerch played for the St. Petersburg Pelicans of the Senior Professional Baseball Association. He went 4-5 with a 6.88 ERA for the club. His story is featured in Peter Golenbock's The Forever Boys, a chronicle of the lone full SPBA season.