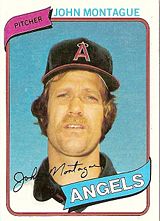 John Montague was born in Newport News, VA on September 12, 1947. He attended Newport News High School and then Old Dominion College in Norfolk, VA. He was first picked by the Chicago White Sox in the 15th round of the 1965 amateur draft but elected not to sign. In 1967, he was selected by the Baltimore Orioles in the secondary phase of the January draft.

Montague began his pro career only in 1969. He was the best pitcher with the Miami Marlins in the Florida State League. His record was 12-8 with a sparkling 1.53 ERA, second in the league among those who pitched at least 100 innings. His 166 strikeouts were also second in the circuit.

In 1972, the Orioles loaned him to the Montreal Expos organization, so that he could pitch in a familiar environment, as the Expos' new AAA affiliate was located in his hometown of Newport News. Montague was the most consistent starter with the Peninsula Whips, with a 3.28 ERA in 29 starts. He led the team in ERA, innings pitched and strikeouts. Only 35-year-old veteran Howie Reed, who was on the tail end of his pro career, had more wins and starts than Montague. His performance didn't go unnoticed. The Orioles kept him during spring training in 1973 but at mid-April, they officially sent him to the Expos for a player to be named later. The deal was completed in April 1974 when Mickey Scott was sent to Baltimore.

The 1973 season was even better for Montague in Peninsula. He led the team in every category: wins (15); games started (27); complete games (16); innings (194) and strikeouts (108). His performance earned him his first call-up to the big leagues in September, when the Expos were involved in a pennant race for the first time in their history. He was used four times, mostly in mop-up situations.

The sophomore jinx hit Montague hard in 1975. He started rather well and he didn't allow a single run in his first seven outings. But it all crumbled down starting on May 17th and his ERA ballooned to 5.60 on June 1st. That was his last game as an Expo and in fact, he wouldn't be pitching again in the majors until September, with the Philadelphia Phillies, who acquired him on August 29th on waivers. In the interim, he went 7-8, 1.73 in 18 games as a starter for the Memphis Blues in AAA. He pitched ineffectively for Philadelphia, allowing 8 hits and 5 walks in 5 innings.

He was back in AAA ball in 1976, pitching for the Oklahoma City 89ers. He led the American Association with 14 wins and his 2.64 ERA was second among those with at least 100 innings. On May 25th, he pitched a seven-inning no-hitter in the first game of a doubleheader against the Omaha Royals, even though he was a little wild, allowing 7 walks in the process. After the season, he was named Pitcher of the Year in the 1976 American Association. It was his last stint in the minors as the newly-created Seattle Mariners purchased his contract from the Phillies shortly after the expansion draft. He made the team in Spring 1977 and went on to be a key component on the Mariners' first ever pitching staff. His 4.29 ERA was the team's best among qualifiers (even though only Glenn Abbott and Montague pitched enough innings to qualify on the team!). He started 15 games and relieved in 31 more, but he was way more effective as a reliever (3.32 vs 5.56 ERA). He got the first save ever in Mariners history. What's more, in late July, Montague retired 33 consecutive batters covering two relief outings, then tying an American League record held by Steve Busby.

A hip pointer curtailed his 1978 season as he missed time in May and his season ended in late July. His ERA was 6.18 in 19 games.

He came back with Seattle in 1979. On August 29th, Montague was traded to the California Angels, who needed help in the race for the AL West title. The Mariners got Jim Anderson in December to complete the deal. With the Mariners, Montague was a useful reliever, getting 6 wins in 10 decisions, while his ERA was rather high at 5.57. But with the Angels, he became an integral part of the bullpen, getting 6 saves until the end of the season, even though his ERA was somewhat high at 5.09. The Angels went on to win the American League West, but were ousted by the Orioles in the 1979 ALCS, Montague losing Game 1 a three-run home run by John Lowenstein in the bottom of the 10th inning.

Montague began the 1980 season as the number one reliever with the Angels, getting two saves and a win in his first four outings. But from early May, the team was never in contention. The team as a whole had only 5 saves in May, none by Montague. He struggled most of the year, except for a stretch in early July when he blanked the opponent in seven straight games, lowering his ERA at 2.96. But in his last 10 games, all hell broke loose: he allowed 26 earned runs in 25 innings! His season was cut short in September.

Montague was released just before Spring training 1981. The Toronto Blue Jays signed him in early March. He failed to make the team and was released on April 6th. He ended up in the Mexican League with the Rieleros de Aguascalientes, with a 2-3 record and a 4.19 ERA in 58 innings. He pitched with the Mexico Tigres in 1982, winning 10 (against 6 losses) and posting a 3.10 ERA in what was his last pro season.