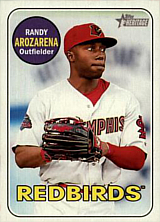 Outfielder Randy Arozarena played two seasons for Pinar del Rio in the Cuban Serie Nacional, in 2013-14 and 2014-15. He saw a lot of playing time the second year, hitting .291/.412/.419 in 74 games. Pinar del Rio reached the 2015 Caribbean Series (and won the tournament) but he was left off its roster as he had defected. He reached Mexico, and in 2016 he played 5 games for the Toros de Tijuana in the Mexican League. He saw more playing time in the Mexican Pacific League in 2016-17, with the Mayos de Navojoa, where he hit .289 in 59 games.

Arozarena signed with the St. Louis Cardinals organization on August 1, 2016, and was first assigned to the Palm Beach Cardinals of the Florida State League in 2017, before finishing the year in the AA Texas League with the Springfield Cardinals. In 121 games between the two stops, he hit .266/.346/.437 with 32 doubles and 11 homers, earning a mid-season All-Star spotin the FSL. He returned to Navojoa after the season and had a great year in winter ball, batting .292 with 25 doubles and 14 homers in 64 games. He continued to do well in 2018, which he split between Springfield and the AAA Memphis Redbirds, as he hit a combined .274/.359/.433 in 113 games. He was selected to play for the World Team in the 2018 Futures Game and in 2019 was a non-roster invitee to the Cardinals' major league spring training.

On August 12, 2019, with Jose Martinez being placed on the injured list, and with Randy hitting .368/.442/.562 to that point at the AAA level, he was called up to the big leagues. He made his debut two days later, on August 14th, going 2 for 4 in a 6-0 win over the Kansas City Royals. In 19 games for St. Louis, he hit .300 with 1 homer and 3 RBI and impressed enough to be kept on the team's postseason roster. He went a combined 0 for 4 as a pinch-hitter in the NLDS and NLCS. On January 9, 2020, he and Martinez were traded to the Tampa Bay Rays in return for two prospects, Matthew Liberatore and Edgardo Rodriguez; the two teams also swapped Compensation Round draft picks.

He started the 2020 season in the Rays' alternative training site, only making his debut on August 30th. However, from that point on, he was red hot, hitting .281 with 7 homers and a slugging percentage of .641 in 23 games to win a starting job as the team's leftfielder during the postseason. In the Wild Card Series against the Toronto Blue Jays, he went 4 for 8 with 2 doubles and a triple and was off to the races. He had 8 hits and 3 homers in the Rays' win over the New York Yankees in the Division Series, and then hit another 4 homers in the ALCS, against the Houston Astros. That included a key two-run homer off Lance McCullers in the 1st inning of Game 7, and he was named the winner of the ALCS MVP Award. He cooled down in the World Series, as the Los Angeles Dodgers were onto him and avoiding throwing him too many of the fastballs on which he had feasted thus far. Still, in the 9th inning of Game 3, he homered against Kenley Jansen, an otherwise meaningless run in a 6-2 loss. That hit gave him a share of one record - most homers in one postseason, 8, tied with Barry Bonds, Carlos Beltran and Nelson Cruz - and the sole possession of another - most hits by a rookie in one postseason, 23, one more than the previous holder, Derek Jeter. He homered again in Game 4 to take sole possession of the record, although the Dodgers' Corey Seager was only one behind him, and in Game 5 he took over the all-time record for hits in one postseason with his 27th, passing Pablo Sandoval. In Game 6, he hit a 10th and final homer in the 1st inning, and added a 29th hit later on the game to finish the postseason with 29, as the Rays lost that game and the series. He also tied the World Series record for homer by a rookie, with three - joining Charlie Keller of the 1939 New York Yankees. His 64 total bases in the postseason also set a new record, by a wide margin while he tied David Freese of the 2011 St. Louis Cardinals with 11 extra-base hits.

Following his appearance in the World Series, he made the news again that November when he was arrested in Mexico in conjunction with a domestic dispute. He was apparently visiting the Mexican state of Yucatan in order to make contact with his daughter, who had been born there shortly after he had defected from Cuba and established residency in the country. He was now estranged from the child's mother, and had been married with another woman just after the World Series, but had continued to support his daughter financially. It wasn't clear what exactly had happened, but he was arrested on charges of attempted kidnapping of his daughter, and of assaulting the mother's current partner. He was released a couple of days later when his former spouse announced that she did not wish to press charges. During the 2021 season, maybe those who expected him to keep up his otherworldly pace from the previous year's postseason were disappointed, but otherwise he had a very solid season in what was his true rookie year. He hit .274 in 141 games, with 32 doubles and 20 homers, scored 94 runs, drove in 69 and stole 20 bases with an OPS+ of 131. And then the postseason came around and he made Game 1 of the Division Series his personal playground against the Boston Red Sox on October 7th: he drew a lead-off and walked and scored the game's first run on a double by Wander Franco in the bottom of the 1st, hit a no-doubt homer off Nick Pivetta in the 5th, and in the 7th pulled off a straight steal of home with two out and lefty Josh Taylor on the mound as the Rays won, 5-0.