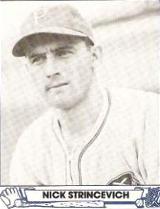 The book Hardball on the Home Front has a chapter on him. His father was from what is now Bosnia, and was called "Jumbo", so the two got called "Big Jumbo" and "Little Jumbo". Nick played baseball as a youngster and also worked long days in the sheet mill after his sophomore year in high school during the Depression. He also played on the mill team and another semi-pro team. He was discovered by a former minor leaguer, Bob Prysock, against whose team Nick got 18 strikeouts.

Prysock told the Yankees about him and they signed Nick after Nick threw batting practice to Babe Ruth, Lou Gehrig and others. Nick continued to work sometimes in the mill, and earned a wartime deferment as a result for part of the war.

At the time of his death in 2011, Strincevich was the third oldest living MLB player, at age 96.