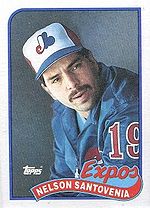 He moved to the United States at a young age and went to Miami Southridge High School. In June 1979, he was selected by the Philadelphia Phillies in the 29th round of the amateur draft but didn't sign. He then attended Miami-Dade College and the University of Miami. He was picked by the Montreal Expos in the third round in 1981 out of Miami-Dade but didn't sign. One year later, he won the College World Series with the Hurricanes and was named on the All-Tournament team. The Expos drafted him again, this time in the secondary phase of the 1982 amateur draft. This time, he signed, with scouting director Danny Menendez doing the honors.

After a strong training camp in 1985, Santovenia began the season with the Indianapolis Indians in the American Association but he barely played and was thus sent back to the now Jacksonville Expos in April. He was back to AAA soon thereafter but was back in AA for good in June. He played a total of 85 games, hitting .216. He didn't play much in 1986, beginning the season again with Jacksonville and hitting well with an OPS over 1.000 in 31 games. He was promoted to Indianapolis to finish the season and was the starting catcher when the team won the American Association playoffs.

1987 was his breakthrough year. For the first time, he contributed offensively through an entire season. In 117 games, his line was .279/.345/.467 with 17 home runs and he was named on the post-season All-Star team. He was called up to the Expos that September but appeared in only 2 games with one at-bat as the Expos were battling the St. Louis Cardinals and the New York Mets for the NL East title.

In 1988, he was Indianapolis' main catcher when the season began but in May, he was called up by the Expos and remained with the big league club the rest of the year, with 84 starts. His offensive line was .236/.294/.392. He hit two home runs on September 3rd against the San Francisco Giants. The first was a solo shot off Scott Garrelts and the second was a walk-off game-winning two-run homer off Roger Samuels. It was the only two-homer game in the major leagues. Santovenia shared duties with Mike Fitzgerald in 1989. He missed a month in May and June due to a broken finger. The highlight of his season came on July 28th when he caught Vince Coleman stealing after he had been successful in his last 50 attempts. In 97 games, his line was .250/.307/.352.

He was the opening day catcher in 1989 but he never got going offensively with a batting average that was below .200 most of the season and an OPS below .600. In May, he was even demoted to Indianapolis, a move that angered teammate Dennis Martinez who voiced publicly his displeasure and criticized the Expos for the way they handled Santovenia, hinting at racism towards a fellow latino player. As for Santovenia, he was with Indianapolis for a couple of weeks where he seemed to have regained some pop, hitting .318 in 11 games. He came back in late May but things didn't get better with Montreal. In July, he went under the knife for a left knee injury and came back in September.

He started the 1991 season with the Expos but his playing time was down especially after Tom Runnells took over as manager, replacing Buck Rodgers. In June, he was hitting .261 with a .671 OPS when he was sent down to Indianapolis. He first refused the assignment and was suspended. He relented though and accepted the demotion. In 61 games in AAA, his line was .262/.330/.400. It was his last season in the Montreal organization as he was released by the Expos in December.

Santovenia signed as a free agent in February 1992 with the Chicago White Sox organization. He was called up in July playing 2 games including 1 start when he hit the last home run of his career against the Boston Red Sox. But he played most of that year with the Vancouver Canadians in the Pacific Coast League. In 91 games, his line was .263/.346/.384. In December of that year, he signed with the Kansas City Royals organization. He spent the 1993 season with the Omaha Royals in the A.A., playing 81 games and hitting 11 home runs while hitting .237. He was called up in September and played 4 games, the last of his Major League career. He re-signed with the Royals in November. He began the 1994 season with Omaha and was recalled in early July. He spent more than a week with the big league team but didn't appear in a single game. He was sent down in mid-July and he ended the season with Omaha where he played 45 games and hit only .166.

In Spring 1995, he was part of a special training camp held by the union for unsigned players after the strike was over but found no taker.